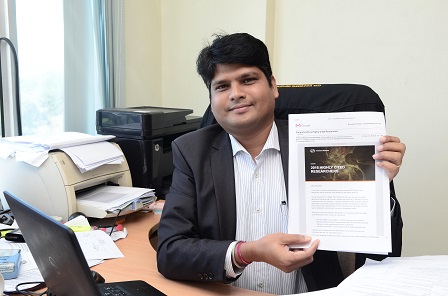 SERDANG, Dec  21 - Associate Professor in the Department of Civil Engineering, Faculty of Engineering, Universiti Putra Malaysia (UPM), Dr. Biswajeet Pradhan has been named as one of the world’s most highly cited researchers in the latest Highly Cited Researchers 2016 Report.

The report was published by Clarivate Analytics, formerly the Intellectual Property & Science business of Thomson Reuters.

Dr. Pradhan, 41, is the first researcher from UPM to have been named among the world’s most highly cited researchers, and among six researchers from Malaysia named in the 2016 report as the world’s leading and most influential scientific minds by Thomson Reuters.

He earned the distinction by publishing a high number of scientific papers that were ranked among the top one per cent (top 1%) most cited for his subject field and year of publication. His H-index in SCOPUS was 46.

Dr. Pradhan who has been working with UPM since 2007, said he got to know about the recognition though an e-mail sent by Thomson Reuters last month.

“Even though I had written quite a number of scientific papers, I just couldn’t believe my eyes when reading the e-mail, and, at that moment I thought it was a hoax. So, I replied the e-mail to reconfirm, then only I realized that it was real,” he said in an interview at his office here.

He said he was happy to have been accorded with such invaluable recognition, and more so because he was the first from UPM to be named among the world’s most highly cited researchers in the Highly Cited Researchers report.

“I hope this will spur and encourage more researchers from UPM to get such an outstanding recognition and distinction.

“It is very significant, it shows the growing strength in research as well as the national and international impact of UPM as a science hub,” he said, while expressing his gratitude to UPM Vice-Chancellor, Prof Datin Paduka Dr. Aini Ideris, officials and staff for their support that enabled him to achieve the distinction.

With more than 16 years of teaching, research and industrial experiences, Dr. Pradhan has written 370 articles, of which 270 were published in science citation index (SCI/SCIE) international journals.