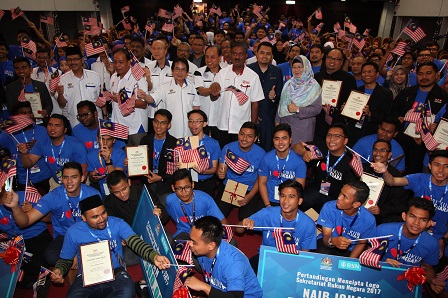 SERDANG, August 13 - Universiti Putra Malaysia (UPM) was elected as the host of the 2017 Rukun Negara Secretariat (RNS) Convention  from the 11th to 13th August 2017 at the Fifth College, UPM.

The convention which was organised for the very first time by the Department of National Unity and Integrity (DNUI) in collaboration with UPM, features the theme of ‘Rational and Moderate Graduates’ with emphases on the issues of unity and the establishment of rational and moderate thinking among university students.

The RNS Convention offered university students with an opportunity to engage in intellectual and academic discussions with Malaysia’s influential figures and student leaders from the National Rukun Negara Secretariat.

Minister in the Prime Minister’s Department, Tan Sri Datuk Seri Panglima Joseph Kurup, said “The RNS is an agent that cultivates one’s devotion to the country.”

“University students make up the largest group of the Malaysian population,” he added.

“This convention allows university students to gather their thoughts and voice out their opinions in determining Malaysia’s growth by 2050,” he further commented, while officiating the closing ceremony of the convention.

“UPM’s role as the host to the RNS Convention will not just end here,” he asserted.

“UPM will also provide club advisors in providing ideas and opinions to enable students to carry out unity-related programmes,” he also stated.

The resolutions will be a guideline in the drafting of a more comprehensive RNS Action Plan.

Also held was the Memorandum of Understanding (MoU) ceremony between DNUI and Malaysia Crime Prevention Foundation (MCPF) which aims at enhancing the level of security and crime prevention activities in the community, presenting certificates to participants and  giving away prizes to the winners of the RNS logo creation competition.

RNS, the brainchild of Tun Abdullah Ahmad Badawi was formed in 2008. Up until 2017, RNS has successfully been established in 143 Institutes of Higher Learning, including Matriculation Colleges, Community Colleges, Institutes of Teacher Education Malaysia, Polytechnics, IPTA and IPTS.