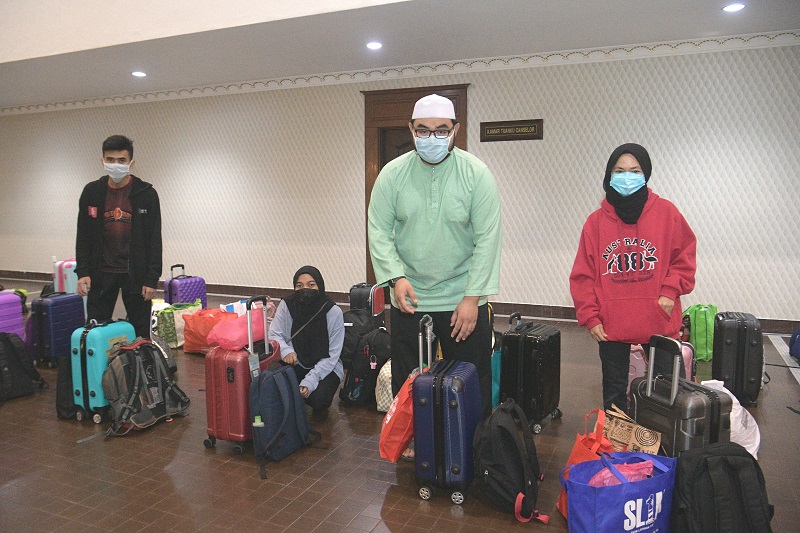 SERDANG, May 2: Adapting to the new normal on campus during the Movement Control Order (MCO) was not an easy task for students. However, with undivided support and care from the lecturers, officers and staff, students were able to adapt with ease.

Adib Farhan Abdullah, a student from the Faculty of Medicine and Health Sciences, Universiti Putra Malaysia (UPM), admitted that he was stressed during the early stages of MCO, as he was worried about the spread of the Covid-19 as well as the restricted movement on campus.

“However, the support, convenience and assistance rendered by UPM, including food provision, have helped students to adapt to the new normal.”

“We are greatly thankful to UPM for showing concern towards its students’ well-being throughout the MCO period,” he said during the interview before departing to his hometown in Ipoh, Perak.

He was among the 1,000 students from both public and private higher learning institutions in Selangor, Kuala Lumpur and Putrajaya that were transported back to a few locations in Perak by buses departing from UPM, the host for managing return trips to students’ hometowns.

Adib Farhan, 23, said the stress he experienced during the early stages of MCO was also because he was far away from his family, and he was worried for their well-being, causing him to feel homesick.

He added that he feels grateful for the initiative taken by the government and the university, allowing him and other students to return to their respective hometowns.

“At first, it was rather uncertain if I was able to go back to my hometown for Hari Raya but now alhamdulillah,” he said, and he continued to hope that all students would keep practising social distancing as well as washing their hands frequently.

His father, Abdullah Yusof, 59, when contacted said that he was vastly grateful because his son had safely arrived home.

“I feel relieved and all our worries have vanished now that Farhan is with us.”

“Although UPM had provided food and other necessities, as a father, I still worried for my son’s safety due to the danger of the Covid-19 pandemic,” he said.

“We are now able to be together in the month of Ramadan and Insha’Allah celebrating Eid-ul-Fitr together as well,” he added.

He also expressed his sincere gratitude to UPM and all parties involved in helping students throughout the MCO, as well as the food donors and the Ministry of Higher Education. - UPM