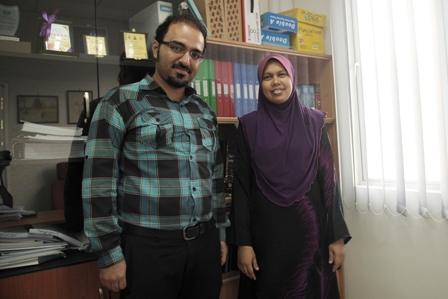 SERDANG,  22 July (UPM) – Most parents would worry over their kids when they read the newspaper story about the Malaysian boy who was foiled by the police recently for ordering 5 air guns through the Internet.

How can these parents shield or prevent their loved ones from these dangers as these children and youngsters hunch over their lap tops and computers in the silence of their bedrooms where they are supposed to be doing their homework or studying?

Down in the offices, the bosses too have their worries with their computers -- they do not know whether their workers are really busy working or they are quietly surfing the Net for fun and entertainment.

Both these parents and bosses can now put their minds at rest if they can get  hold of a new software developed by a bunch of computers scientists of Universiti Putra Malaysia (UPM) led by Assoc. Prof . Dr Nur Izura Udzir of the Faculty of Computer Science and Information Technology.

The software “Global Monitoring and Surveillance System”  allows the parents or the employers to know where their children or workers have gone to, in the WWW of the Net, respectively.

While the name of the software may sound ominous to some, it is actually simple enough for the parents and bosses to unobtrusively check on where their children and workers have surfed to, respectively.

The software, presented at the Malaysian Trade Expo  2013 last February, had won Dr Nur Izura a Silver medal  and a number of business enquiries from the ICT industry players.

She said the programme would be “invisible”  after installation, unlike other systems which are available in the market at a higher cost.

“The software works by capturing the keystrokes in a log assigned to the child or employee’s computer and the log can be checked for the sites visited by that child or worker,” she explained.

She said the parents and bosses have to monitor the sites surfed and then physically delete and block them from the system so that the child and workers can no longer access these  X-rated or unwanted sites.

“At the moment, we don’t have the intelligent software to sense and filter out the unwanted sites before the child or worker can access them, but it is certainly something that we can improve on,” she said.

She said the software is discreet, allowing the bosses to monitor  for company or corporate espionage, as it can trace if a worker is stealing or leaking company secrets.

Dr Nur Izura said any company that aims to implement or improve their security systems and employees’ productivity can install this software, which transcends boundaries.

She noted that there are some people who see the software as one that invades individual privacy but she argues that this is not so, because when a worker signs up to work for a company or corporation, he or she would have signed up to work for, and abide, by the company rules.

The office computer, being a tool for the employee  to work with, is company property and a worker is expected to work during office hours and not indulge in personal work or pastime.

As for parents, it is a question of monitoring to ensure that their children do not fall prey to con artists or other negative influences.

It was with these in  mind that Dr Nur Izura and her team that included her colleague and former PhD student, Dr Ali Dehghantanha, had improved on the software since MTE 2013.

The enhanced software can now allow parents to check on not  only the children’s PCs, but also their mobile phones and game consoles.

“The parents can not only block out any unwanted sites but they can also set the time, say one or two hours, when their children can play their games,” she said, adding that the PC would automatically shut down after the time is up.

The software for parents or individual use is RM9.99 per year but the rates for company will vary in accordance with size.

Dr Ali said several companies are now evaluating the software,  while one whom he last talked to in May, is working on how to integrate the software into their programme. – UPM