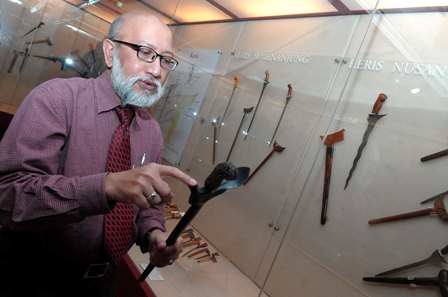 SERDANG February 10 (UPM) - "It is unfortunate if today’syounger generation, do not want to study and know about the significance of the keris that is strongly associated with the formation of the Malay civilisation... and when we learn its story, we would understand the wisdom of the people in the olden days".

Said the Faculty of Modern Languages ​​and Communication Universiti Putra Malaysia (UPM) Dean, Assoc. Prof. Dr. Abdul Mua'ti@Zamri Ahmad about the Malay weapon, known for its various purposes back in the days and is also commonly revered as the symbol of the Malay rulers and sovereignty.

At UPM Heritage Museum alone, there are over 30 diverse collections of keris and other traditional weapons, used by the Malay community in the past, are put on display for public viewing. 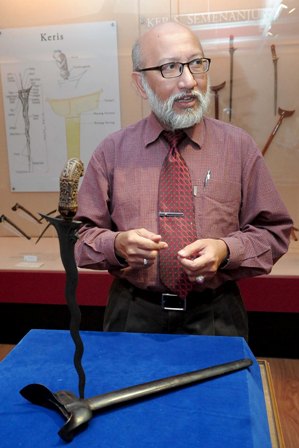 He said, the enthusiasm for this weapon should be nurtured among the younger generation, including higher education institution students, so that the love will not vanish as time goes by, especially when the number of empu (keris blacksmith) is decreasing dramatically today.

He said, empu are those who master the complete craftsmanship of the keris-making, only a few of them are still around today and can be found in Kelantan, Perlis, Perak, Melaka, Pahang and Penang.

"There are some people, especially among youngsters, who are afraid of the keris because they believe there are 'spirits' live in them, but the truth is, there are none... it is just absurd to fear the keris. 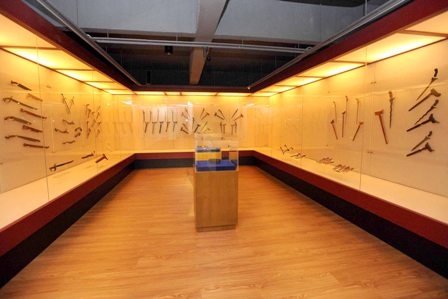 "’Spirits’ live everywhere, we should not be afraid of them because they are God's creatures too, in fact, humans are the best of creation," he said in an interview.

Unfortunately, he said, not many young people who want to delve deeper into the ‘secrets of keris’ and know how they are produced.

Dismal interest among the youngsters to get involved in the keris-making activities is probably derived from the time-consuming period of completing a keris that takes about one month, each would fetch up to RM1,000 and the absence of steady market.

"So, they feel the returns are not worth it compared to the time and money spent in making the keris," he said, adding that not many people collect keris, except collectors who seek fora keris that has historical value.

Dr. Abdul Mua'ti said back in those days, a keris would carry a distinctive identity to its user.

"It is like the identity card... from the hilt, blade, sheath and sampir, to the way it was tucked in, people would know from where the owner came from and his status," he said. 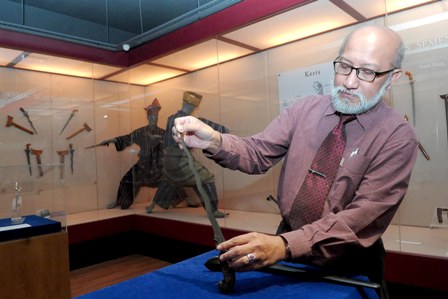 The hilt of a Keris pembesar or the keris used by the dignitaries, was skillfully made from ivory, buffalo and rhinoceros horn, even from elephant or whale tooth.

For the pendekar or warriors, they usually carried straight or short wave-bladed keris, which were easier to wield in a fight.

He said the sampir was carved into boat-shaped design to symbolise that the Malay people were seafarers in those days. "They perpetuated the sea on the sampir."

He added, the art of making this stabbing weapon was intricate and meticulous back then. A well-balanced keris should be able to stand upright, comfortable and easy to use in a prolonged combat.

"In those days, people fought in confined places such as under a house, in a boat and in or under a palace."

He further added, a keris also could either be a combat tool or a ‘cure’. "For example, the hilt of a keris, the one made of black wood, was believed to have the ability to cure and stop profuse bleeding caused by a thrust."

According to Dr. Abdul Mu’ati, keris are generally divided into three types; keris selit, tucked in the waist as an adornment; keris tarung, a stabbing weapon wielded by fighters in a duel; and keris kuasa or keris hukum, used by an executioner in carrying out an execution.

Dr. Abdul Mua'ti said, his passion for keris came about when he was helping his son doing a keris-related school assignment about three and a half years ago. Ever since, he sought for more information pertaining to keris and finally managed to publish a book about the dagger,"Keris Melayu Semenanjung: Suatu Pengenalan", which was launched by UPM Vice-Chancellor, Prof. Dato' Dr. Mohd Fauzi Ramlan recently.

Along the way in seeking such information, he met some empu in Melaka and Kelantan, besides obtaining more keris-related facts from Jakarta Heritage Museum, museums in Palembang, Lombok, Makassar and Singapore. – UPM