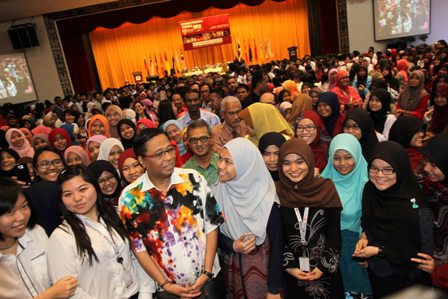 The “friendly get-together with the Mentor Minister” programme was held in conjunction with the Orientation Week for the 3,291 new UPM students for the 2013/2014 c session.

Dato’ Sri Ismail in his speech said he hoped that his meeting with them could  spark off the thinking of the younger or generation Y to provide new and creative ideas on how to modernize the nation’s agriculture sector.

“UPM which was founded on agriculture, is the most important institution in the country in producing the moving force to develop the national agriculture sector. 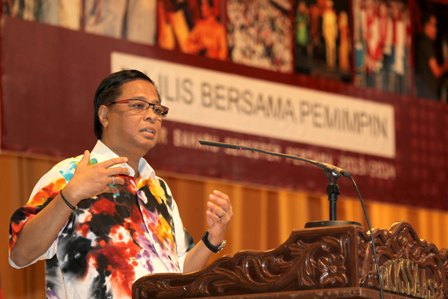 “However, the perception that agriculture is still tied to poverty, not modern, a rural activity, a last career option and the like, are the main obstacles that make the agriculture sector unable to compete with the other sectors,” he said.

He also said that the food crisis experienced in 2008 had shown how important and relevant is the agriculture sector because agriculture is food materials.

As such, the approach to develop the agriculture sector is a huge responsibility that requires the support of all the people that can ensure the success of the national agenda of adequate food production that is also safe for consumption.

Agriculture is science  that has to keep up with technology anhd innovation because these are the elements that will make agriculture a modern sector, he said. 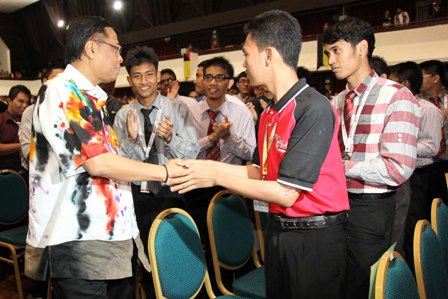 The minister mentor told the new students that they have to change their mindset if they think that only the holders of agriculture degrees need to be involved with the agriculture sector.

“The engineering courses are involved with agriculture. So are biotechnology, finance and business, ICT, and even law can be used in agriculture.

“This means that any courses of study chosen by the new students of UPM can play a role in developing the agriculture sector of the nation,” he said.

At the same time, he said he cannot deny that there are youths who are interested in agriculture but are faced with the difficulty of getting agricultural land and finance.

In view of this, the Ministry of Agriculture and Agro-based Industries is drafting a policy focussing on the creation of the best environment for these youths to join the agriculture sector.

“The ministry will prepare the best integrated package that will help the youths to be involved in agriculture, that is, capital or sponsorship, expertise in agriculture, courses and also marketing.

“This sort of package is sorely needed to ensure that the youths involved can have a guaranteed income and future, and that the choice of agriculture as a career is a profitable one,” said Dato’ Sri Ismail Sabri.

He also said that statistics of the Farmers Organisation Authority showed that up to Discember last year, 45 percent of the 826,163 members of the organisatision are above 60 years old. .