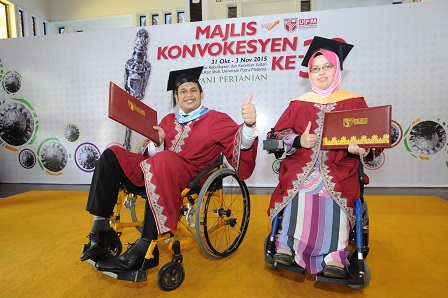 SERDANG, Nov 2: Disability is never a hindrance but rather a key to do the best for two disabled students who were among thousands of graduates who received their scrolls at Universiti Putra Malaysia (UPM)’s 39th Convocation today.

M Hanif Hafizuddin Mohd Azmi, 24, who has been using a wheelchair since four years ago due to nerve pain he suffered when he was in Standard Six in 2003, and Siti Safura Jaafar, 32, who suffered muscle and nerve pains since she was three years old, causing her to be confined to a wheelchair when she enrolled in Form One, could not contain their happiness when they received their scrolls with their family members.

“Parents are instrumental in driving us to success…they are our backbones and our source of strengths,” both of them said when met at the convocation ceremony here.

“I started feeling something amiss when I could not step on my foot…I was limping when I was in Standard Six. The doctor said something about my spinal cord getting loose.

“My movements became limited and I could really feel it when I was about to sit for Sijil Pelajaran Malaysia (SPM), forcing me to walk using a stick.

“At UPM, I started using the wheelchair,” M Hanif who is the second of four siblings said.

“My mother and father always gave me that encouraging words of support when they said “never ever look at your weaknesses but rather at what you can actually do”. These words have been my motivator ever since,” he said, adding that he wanted to pursue his studies and do a Master’s degree to become a lecturer.

Siti Safura, meanwhile, said she had been suffering from a genetic disorder involving her muscles and nerves when she was three years old, rendering her to be weak and unable to walk.

“My family members have been there all along, giving me their support and courage. It was really difficult when I had to be on the wheelchair when I was in Form Three but I mustered the courage not to give up,” she said.

“This ailment caused me to get tired easily. At UPM, I had to manage the time wisely. Praise be to Allah as I was able to endure all these and completed my study,” Siti Safura who is the third of four siblings, said.

“As a person with disability, we must never give up,” she said, adding that she wanted to be a  lecturer. – UPM.