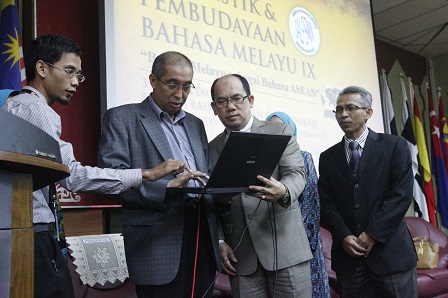 SERDANG, Nov 4 - An international seminar on Linguistics and Acculturation of Bahasa Melayu IX at the Faculty of Modern Language and Communication (FBMK) of Universiti Putra Malaysia (UPM) recently passed eight resolutions, including a statement for standard and corpus planning on Bahasa Melayu be intensified.

It also stated that the ASEAN commmunity should work hand-in-hand in brushing aside all challenges and jealousy for the sake of exploring the wealth in fighting for the empowerment of Bahasa Melayu.

The resolutions were read by Senior Lecturer of FBMK Bahasa Melayu Department,  Dr Hasnah Mohamad who is also the co-chairman, before the closing of the seminar. The two-day event was jointly organized by FBMK and Dewan Bahasa dan Pustaka (DBP) with the theme “Bahasa Melayu as the Language for ASEAN.”

It also stated that Bahasa Melayu should be manifested as the languge for ASEAN in all forms and aspects, with the cooperation of all quarters in various fields. The network of cooperation among institutions such as DBPand other bodies like MABBIM, MASTERA and FOKEPS will surely form the identity of Bahasa Melayu as the most effective vehicle of the decade.

It also agreed that parties responsible in building and expanding Bahasa Melayu such as DBP, Pusat Pembinaan dan Permasyarakatan in Indonesia, and Dewan Bahasa dan Pustaka of Brunei Darussalam, intensify their efforts to inculcate positive attitude and discipline in the society to speak the language.

Earlier, when opening the seminar, Minister of Communication and Multimedia, Datuk Seri Mohd Salleh Keruak said academicians and linguistic experts should promote Bahasa Melayu as the language for ASEAN in line with the role of Malaysia as the chairman of the regional state organization.

“It is only appropriate that efforts are made to promote Bahasa Melayu as one of the main characteristics for the ASEAN Community. Without denying the strength of the English Language which has been in use as ASEAN official language all these years, in order to emerge as a community that is all-ASEAN, a homogenous and standardised use of a language is necessary,” he said.