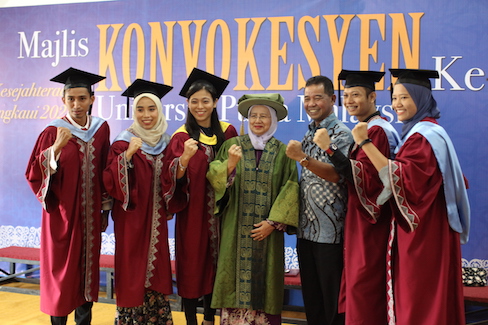 SERDANG, Oct 28 – Being busy as an athlete and shouldering the responsibility of bringing honor to the country has never been a barrier to national athlete Ahmad Luth Hamizan to succeed academically.

He said that he was delighted to be called a graduate after five years of hard work, dividing his time between daily training and lectures at UPM.

"Struggling with assignments and classes while at the same time preparing for a sports tournament at various stages has forced me to be wise in managing my time,” he said. He is also representing the Royal Malaysian Navy in several Malaysian Armed Forces (ATM) sports carnival events.

He said support and encouragement from family, university, National Sports Council (MSN) and Ministry of Youth and Sports (KBS) motivated him further, and he is now pursuing his master's degree in Sports Science.

On his plans for sports, he said he would like to focus on the SEA Games in the Philippines from 30th November to 1st December 2019. - UPM