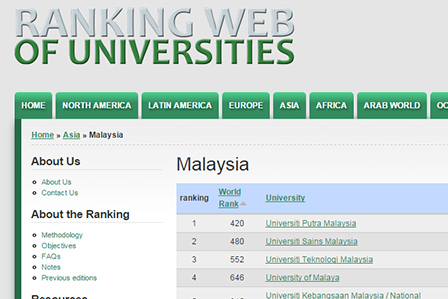 SERDANG, Feb 11 (UPM) - Universiti Putra Malaysia (UPM) managed to nab first place in the Ranking Web of Universities (Webometrics Ranking) in Malaysia, the latest ranking for higher education institutions (IPT’s) websites, of which the results were issued in its January 2015 edition.

In the last year’s July edition, UPM was ranked second among higher education institutions in Malaysia, and it once again emerged to top the ranking after successfully making it for the first time in January 2009.

Based on the January 2015 edition, UPM also managed to climb to the 420th place among the participating universities worldwide, scaling up 90 places from the previous 510th place and has maintained its feat in the world's top 1,000 universities since 2009.

While among Asian universities, UPM has been ranked 76th, improving its standing by 21 places from the 97th place in the last edition.

The rating evaluated more than 20,000 universities worldwide, including 89 from Malaysia; 20 public and 69 private IPT’s.

It also evaluated 'impacts' indicator, where UPM emerged to reach the 1,088th place wordwide, compared to the previous 1,668th place.

Webometrics is a rating system in which the website visibility is used as an indicator to measure the universities performance at a global level and it is conducted by Cybermetrics Lab (Spanish National Research Council, CSIC).

The rating is based on four main indicators; 'impact', 'presence', 'openess' and 'excellence' and the results are issued every six months, January and July each year.

All indicators factor in each university's commitment to teaching, research, international prestige, network with community including industry and economy. - UPM