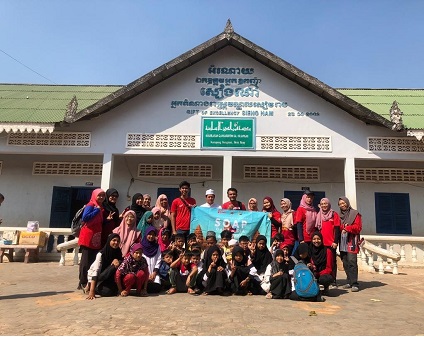 SIEM REAP (Cambodia), Jan 28 – 16 students from the Sixteenth College, Universiti Putra Malaysia (UPM) organised the Society Awareness Programme (SOAP) Cambodia and Beyond in Siem Reap, Cambodia from 23 to 28 January 2019 and selected Madrasah Qamaruddin Al- Islamiah and Madrasah Ar-Raafea'ah in the village of Stung Thmei and Tonle Sap as their preferred destinations.

The programme director, Muhammad Faiz Abdul Manab Muhammad Faiz, a Bachelor of Science in Cell and Molecular Biology student from the Faculty of Biotechnology and Biomolecular Sciences, UPM, said the selection of both madrasahs as the preferred destinations for the programme was aimed at creating awareness and sharing of knowledge through activities conducted with the residents at the madrasahs.

He added that the programme focused on addressing the concept of awareness on the practice of hygiene in life among the children at the madrasahs.

SOAP, a programme which focuses on creating exposure and awareness to the community, especially students on the diversity of lifestyles, cultures and religions, has been consistently conducted at several locations in Malaysia by targeting different social groups.

The supervising Fellow, Siti Mahsuri Talib, said that this time around, SOAP was carried out abroad. 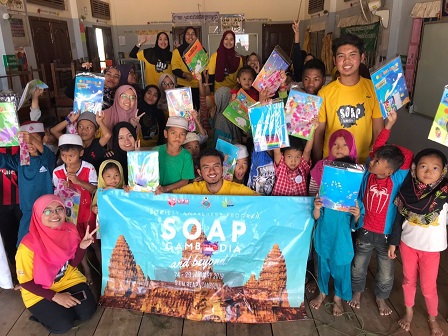 "We try to elevate SOAP to the next level despite having to face with more challenges in terms of finance, interaction and language than if it were to be carried out in Malaysia; however, we managed to overcome these challenges through the commitment shown by the team and the cooperation of various parties," she said.

Programme participant, Melissa Zalia Safira Mamat @ Ali, said SOAP Cambodia and Beyond was quite challenging due to language barriers between the participants and residents.

"Initially, we expected differences in language would make it difficult for us to communicate, but most Muslims in Siem Reap could speak Malay and English well. This motivates the participants to learn more about the Cambodian culture," she said.

The activities carried out by SOAP team at Kampung Stung Thmei, centred around the An Naekmah Mosque which is located near Madrasah Qamaruddin Al-Islamiah. 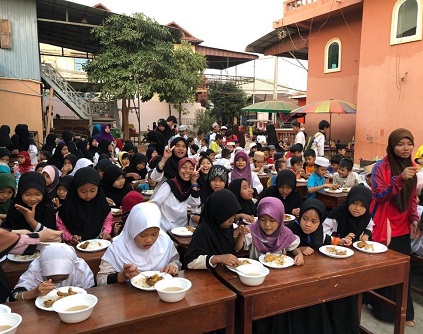 With the help of Ustaz Ismail Yakob, a teacher at the madrasah, participants had the opportunity to live with their foster families for three days and to taste traditional Cambodian foods such as Lembu Naik Bukit, Daging Loklak and traditionally homemade sausages.

Various activities were held during the team’s five-day and four-night stay at Stung Thmei and Tonle Sap. Through the slot ‘Jewel of Life: Children’s of Cambodia’, the children were exposed to the importance of basic personal hygiene through the Jom Sihat slot which included tooth brushing activities and the 7 steps to wash hands, and the children also showed their talents and knowledge through the Art of Khat Writing and 'English and Kids' activities.

The slot 'Taste It, Love It' was filled with communal activities with the residents and students at the madrasahs. At Stung Thmei, the SOAP team served 150 madrasah students with Malaysian tasty cuisine such as chicken curry, Nasi Impit Kuah Kacang (compressed cooked rice served with peanut sauce) and cha-cha porridge while at Tonle Sap, the menus selected were meat cooked with soy sauce, chicken soup and Nasi Impit Kuah Kacang.

The principal of Madrasah Ar-Rafee'ah, Ustaz Yaakob Sulaiman, said the students, aged between 6 and 12 years old, were happy with the visit by UPM students as it had definitely left them with a joyful memory and the opportunity to know the outside world.

The SOAP team also handed over donated items such as robes, telekung (an outfit worn by Muslim women during prayers), iqra', soaps, toothpastes and toothbrushes as well as stationery to both madrasahs.

The SOAP team also visited the world heritage site (UNESCO), Angkor Wat which is also known as the 'City of Temples'.

Traveling as early as 4 am to Angkor Wat by tuk tuk was a new experience for all the participants. They were able to witness sunrise in the morning at the historic temple and later sunset in the evening at the Phnom Bakheng temple after making a 20-minute climb. - UPM