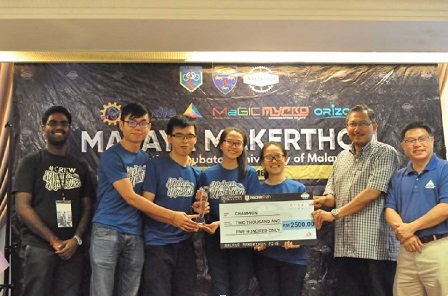 KUALA LUMPUR, 7 April - A student from the Department of Chemical and Environmental Engineering of the Faculty of Engineering, Lew Pei Sze and her team named Fusion, won the first prize at the Malaya Makerthon 2018 which was held for the first time.

Other members of the team were a student from Universiti Teknologi Malaysia (UTM) and two students from KDU University College.

14 teams from various public and private universities throughout the country took part in the competition. It was organised by the Universiti Malaya (UM) in collaboration with the Malaysian Communications and Multimedia Commission (MCMC) and was held at the Innovation Incubator, UM from 5 to 7 April.

The prototype developed by Fusion, the Smart Bin, was inspired by the Internet of Things (IOT). The Smart Bin has the capability of sensing the level of garbage contained in the bin.

When the quantity of garbage goes beyond the set limit, a compressing plate installed on top of the bin will be automatically activated to compress the garbage.

The compression process is repeated a few times until the garbage can no longer be compressed. The Smart Bin will send a signal over the WiFi to the garbage collectors to inform them that the garbage is ready for collection. – UPM