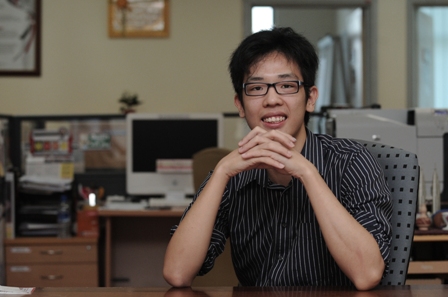 SERDANG, 8 May (UPM) -  When he was young, he dreamt of owning a boutique coffee house somewhere in his home island of Penang but now  he is determined to become a full-fledged chemical engineer with the dream of resolving the energy issue of the day.

Saw Ting Yik, 23, who did Unversiti Putra Malaysia (UPM) proud by winning the Gold Medal for being the best final-year engineering student from the Institute of Engineers Malaysia (IEM) last month, said he would completing his four-year chemical engineering studies in July and graduate in October this year.

He was one of the two final-year engineering students who received the IEM Gold awards at a dinner gathering on 20th April this year. The other female student is from UNIMAS.

They were chosen from among all the final-year engineering students in the Malaysian public institutions of higher learning, based on their academic performance and co-curricular activities.

Ting Yik has scored a CGPA (or cumulative grade point average) score of 3.934 and he was president of the UPM chemical engineering students society (ChESS) in 2011before winning many prizes in his undergraduate days.

Ting Yik said he has been admitted by Cambridge University to read his Ph.D in chemical engineering and he is scouting for a scholarship to make it to London in October to fulfill his dream.

“I guess if I cannot get a scholarship, then I will go to work first,” he said.

But after finishing his secondary schooling at Chung Ling High School, he enrolled for matriculation and opted for chemical engineering at the Department of Chemical and Environmental Engineering of the Faculty of Engineering of UPM.

His mother, a Taiwanese, is a housewife and his other sibling, a younger sister is a first-year student at Universiti Kebangsaan Malaysia (UKM) pursuing her dream in anthropology and sociology.

“I certainly want to be a chemical engineer and I want to serve the people by finding the answer to the energy problem since oil and gas is going to be depleted in 20 or 30 years’ time. The answer has to be green energy,” he said.

Ting Yik who was also vice secretary of PEMAJU in 2010/2011 had won 1st place in a public speaking competition organised in conjunction with “Water! 2011: Youth Conference” that was co-organized by Coca-Cola, Malaysia Nature Society and UPM to help raise awareness on global water crisis.

He was invited as one of the panels for the forum held during the event for winning the competition.

Besides that, he also participated as the sole chemical engineering student in a group of mechanical engineers to represent UPM in Shell Eco-Marathon Asia 2011. He focused on engine development and helped to construct a prototype ethanol vehicle capable to travel 190 km/L gasoline.

His supervisor, Prof Luqman Chuah Abdullah who is happy and proud of Ting Yik’s achievement, said he found the student to be very good in time management.

“He was an active leader who could get his ChESS members to undertake so many projects and yet maintained his academic score,” he said.

Prof Lugman also found Ting Yik to be resourceful, applying all that he had learnt in his final-year plant design project to qualify as an associate member of the Institute of Chartered Engineers (ICE), UK.

To graduate as a chemical engineer, the students have to complete a research project but they would have to do a plant design project to be a member of ICE.

His plant design project is on the recycling of tyres for commercial purposes, an idea derived from his internship with the French multi-national company, Technip.

To complete his final year studies, Ting Yik is now working with one of his lecturers on nano-technology for the production of carbon nano tubes, sourcing the carbon dioxide from the atmosphere instead of some conventional chemical processes. Carbon nano tube is used widely in the industry, like the handphones.

“Well, I may go back to work for Technip and maybe get a scholarship from them,” he said nonchalantly. – UPM