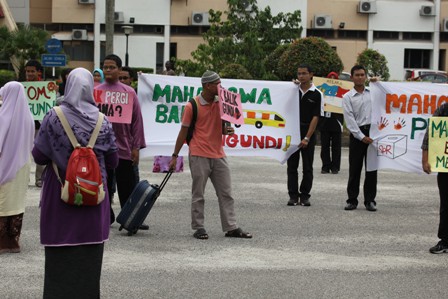 SERDANG, 29 April (UPM) – A group of about 50 student leaders of Universiti Putra Malaysia (UPM) came out today to urge their fellow students to go back to their respective polling centres and fulfil their voting duty for the 13th General Elections.

They were led by UPM’s Student Council President, Ahmad Bukhari A. Rahim, who said that their initiative was to raise awareness among the students that as registered voters, they have to go back to their respective polling stations to fulfil their responsibility as citizens on polling day.

“Our campaign such as this would cultivate the sense of belonging for the country and the students’ nationalism spirit,” he said in his speech at the gathering at the Central Lecture Hall. 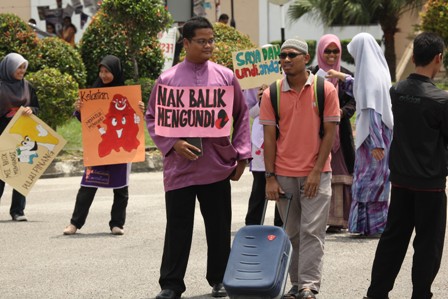 UPM students, he said, should be exposed to healthy politics in accordance with the democratic practices in the country.

“Vote wisely. Select leaders who are genuinely capable of carrying out their trust; make your choice rationally and not emotionally,” he said.

Meanwhile, the President of Islamic Student Association of UPM, Muhammad Faizzuddin Ismail, said the programme today was the second, after the first that was held in early March.

“Today’s campaign is the continuation from the previous awareness programme, with the hope to gaining the momentum on the awareness of the students,” he said.

Among the activities held during the campaign was a talk conducted by an officer from the Election Commission of Malaysia (SPR) on the methods and regulations during the voting process, he said - UPM