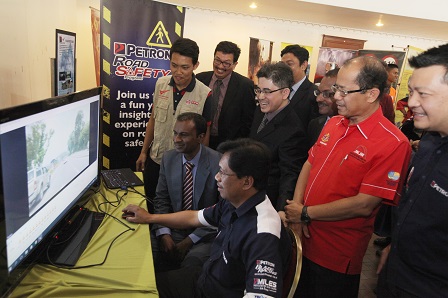 SERDANG, May 31 - The Road Safety Research Centre of Universiti Putra Malaysia (UPM), has successfully developed a new system of training in anticipation of road hazards, or Hazard Perception Training (HPT), for motorists in the country.

Director of the Centre, Associate Professor Dr. Law Teik Hua, who created the system, said having good road hazard perception skills was crucial in reacting to actual or potential hazards so that motorists could take the appropriate preventive actions to avoid accidental contact.

“This system of training will not only coach drivers or motorcyclists to the actual road environment and condition but also emphasizes on a more systematic and accurate way where they can assess their perception to anticipate danger in their midst.

"Through the support and cooperation from Petron,  UPM has come up with this HPT new system and UPM students, aged between 19 and 25, from various faculties will be involved in the training which will take place from June to December 2016, "he said.

HPT launched under Petron's Road Safety Programme four years ago was aimed at promoting good and safe driving or riding among students.

The campaign took place at nine universities, in collaboration with Honda and Goodyear Malaysia to promote road safety which is certified by JKJR.

HPT is the first Petron’s special collaboration with UPM’s Road Safety Research Centre  to assess road users’ ability to anticipate and avoid potential hazards on the roads. It also helps to identify the behavior of motorcyclists and increase their traffic perception skills by providing them with hazard perception skills training. 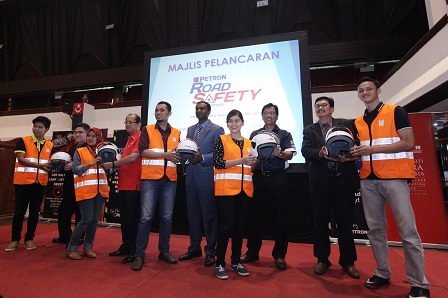 Dr. Law added that scientific research indicated that the failure to perceive road hazard was one of the prime causes of road crashes. “Therefore, having good road hazard perception skills is crucial in reacting to actual or potential hazards.

“Then, a decision can be made about road hazard, and driver can take the appropriate preventive actions to avoid accidental contact.

“Compared to experienced drivers, there is much evidence to suggest that novice drivers tend to have difficulty in perceiving driving hazards,” he said.

He added that inexperienced drivers took significantly longer time to acquire complex perceptual and cognitive skills as well as visual search and attention, and the ability to self-assess their driving skills.

“However, HPT has not been implemented in Malaysia. Thus, the ability of drivers to anticipate potentially dangerous situations cannot be assessed. Therefore, in Malaysia, it is expected that poor hazard perception skills of drivers may be one of the contributing factors of road crashes.

“This is especially relevant for motorcycles as motorcycle operation is typically a more complex task than driving a car as it requires excellent motor skills, physical co-ordination and balance,” he said.

He also said failure of motorcyclists to anticipate road hazards could pose a danger to other road users. “In Malaysia, more than half of road fatalities involved motorcyclists.”