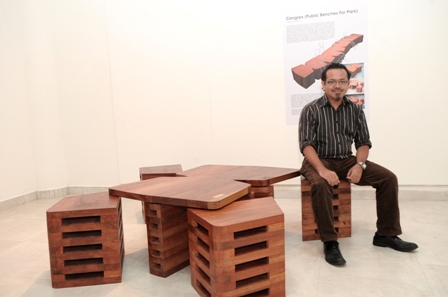 SERDANG, 15 April (UPM) – Benches specially designed by a team under Universiti Putra Malaysia (UPM) lecturer for public parks are not only unique but also aesthetic enough to re-define what rest and recreation in these public places should be.

Made completely of meranti, an expensive tropical hardwood, these modular benches called Congrex are the creation of the team led by Dr Ahmad Rizal Hj Abd Rahman, head of the Department of Industrial Design of the Faculty of Design and Architecture, UPM.

The idea for the unique bench had originated from a design by a final year student.

These solid benches with their visible wood grains can easily lend an air of class and elegance to any park, and this is probably what influenced the juries to award Congrex with a Gold medal at the Malaysian Technology Expo (MTE) 2012.

However, they are too valuable that they should be deployed to grace homes and public lounges, while cheaper versions are found for public parks.

“Yes, we are currently looking at other materials like fiber, stainless steel, concrete or composite to re-create the benches without sacrificing any of their appeal and aesthetic quality,” said Dr Rizal.

He agreed that nyatoh wood is too expensive to be exposed to the elements in a public park, unless they are placed in covered places with little or no chances of vandalism or theft.

Nevertheless, he is just as happy that the original benches which have been patented find its pride of place in any private homes, mansions or public lounges. 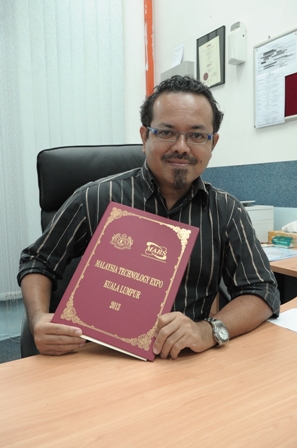 In the development of the award-winning design from scratch, he explained that they had to firstly observe how the Malaysian people behaved in public parks in relations to the climate and environment.

“They usually like to eat and chit-chat in the park,” he said, adding that this was why he came up with the modular concept for them to shift the stools to their convenient.

Unlike the conventional ones where people have to sit side by side, this cluster of furniture can be expanded with more tables and stools, making them more functional to meet human requirements.

Then, they had to think of the physical and non-physical aspects of their design.

The physical aspects entailed materials, colours, manufacturing while the non-physical elements were culture, aesthetic quality, and even nostalgic reasons.

“You know, when you become more globalised, the more closely you would want to cling to your roots or culture,” said Dr Rizal with a chuckle.

To illustrate his point, he referred to Lat’s cartoon where the famous cartoonist used a bucket to pour water over his head when taking his bath, instead of the showers as in most homes in the city.

For this reason, Dr Rizal said he had earlier designed benches with the wau bulan (a Malaysian kite shaped like the crescent moon) frames which were his favourite.

In the case of the Congrex benches, Dr Rizal said they were designed and built as high value furniture in order to have “character” and be unique enough to be even a collector’s item.

The prototype of Congrex which cost about RM3, 000 to build was already bought up by an architect for more than double the price even before the MTE.  “The architect wanted the benches for his home,” Dr Rizal said.

The product has been registered with the Industrial Design (ID) under the names of Dr Ahmad Rizal, Ruhaizin Sulaiman and student Fatin Hamidah Mahidin.  -- upm