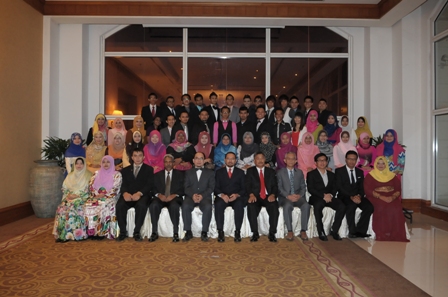 BANGI, 17 March – In keeping with their tradition, the students of College Tun Dr Ismail (KTDI) held a dinner at Equatorial Hotel Bangi to fete 77 of their hostel mates who are graduating in May this year.

The dinner with the theme TEAN 2013 (MKT’13) was also to present awards to those students who excelled in their studies as well as co-curricular activities during their stay at KTDI, of the hostels of Universiti Putra Malaysia (UPM).

Head of the TEAN 2013 programme Nur Alif Akid Jamaludin said besides celebrating with the final-year students, the event would  spur  the younger ones to excel in their studies.

“Every student from KTDI has the chance to get involved in this event which should   strengthen the ties and networking  among them,” he said.

The event that was organized by the Student Supreme Council of KTDI 2012/2013 in collaboration with the management and Student Affairs Division was officiated by the Director of the Investigation Division of the Malaysian Anti-Corruption Commission, Datuk Mustafa Ali. 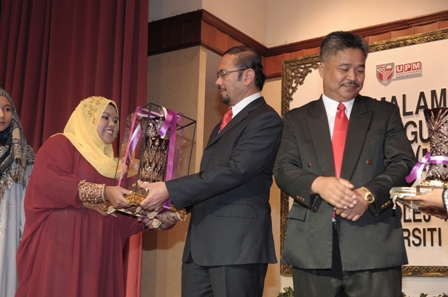 The top Third Collegian Award was presented to Noramira Ahmad who has meet all the criteria of loyalty and most contribution to the college, leadership dedication and credibility, no disciplinaryproblem, a CGPA of 3.5 and above. Her selection for the award was approved by the members of the Award Selection Committee.

The event was also graced by a dance performance by the students.

KTDI is one of the earliest hostel to be built in UPM, Serdang after the Mohamad Rashid College (KMR). Formerly known as the second college before it was re-named “third”,  KTDI is seen as the most influential college in UPM with its excellent achievements in cultural, academic and sports arena.

It was the unbeaten champions for 17 consecutive years in the Inter- College Sports competition.