﻿﻿ “This Success Is A Gift For Mom | Universiti Putra Malaysia 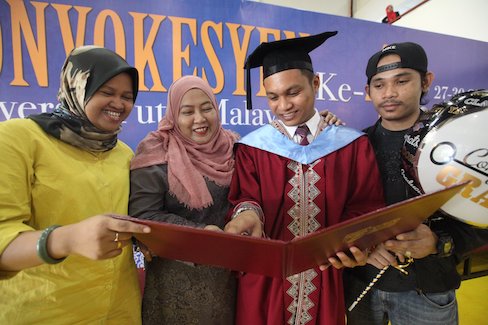 SERDANG, 27 Oct – Mom’s sacrifice is too big, and this success is a gift for mom, said a Bajau Kagayan ethnic graduate, Mohammad Rasdly Abdul Batin.

The second son of eight said that the sacrifice of his mother who is from the Philippines is too big, and she has been separated from her family for over 26 years.

“My mother is my motivation for me to study hard to attain my degree,” he said.

However, both his parents were not able to attend the convocation ceremony.

After completing the Malaysian Higher School Certificate (STPM), Muhammad Rasdiy, placed UPM as his first choice to further his studies and had previously applied to enter UPM three times.

He expressed thanks to UPM and the Zakat Centre for assisting him in various aspects especially finance.

He also worked part-time to cover the cost of living for the four-year period that he was studying.

Muhammad Rasdly is also an active alumnus of SMK Banggi, Kudat, Sabah and wants to always serve the school to express gratitude and repay the good deeds of teachers who had sacrificed to educate him. - UPM