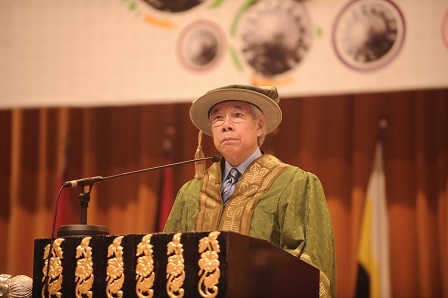 SERDANG, Nov 1 – Graduates must always remember and appreciate the sacrifices made by their parents to allow them to succeed in their studies and be known as graduates, said Universiti Putra Malaysia (UPM) Pro Chancellor, Tan Sri Lim Ah Lek.

“I realized that not all graduates come from well-to-do families. Therefore, they must appreciate the sacrifices of their parents who have sent them to university until they are able to complete their studies and are now known as graduates,” he spoke at the third session of UPM’s 39th Convocation here where he presented degrees and diplomas to 893 graduates.

In congratulating the parents and families of the graduates, he said inspirations they obtained from their parents could have allowed them to face all challenges, pressures and obstacles while studying in a more matured, better and successful manner.

He added that graduates should never forget their parents’ sacrifices in terms of their time and energy spend on them, their financial resources and patience. He also said the world’s economic uncertainties posed a challenge to graduates in finding a job, therefore, they should be ready to equip themselves with business traits and able to create jobs.

Based on a study on Graduates’ Efficiency in 2014, UPM achieved 82.2 per cent where its graduates were able to secure a job, become entrepreneurs and pursue their study to a higher level. “This is the highest score to have been made by a public university.

At the same time, in this era of borderless world, I believe that the graduates produced by UPM will be able to fulfil the market workforce requirements not only in the country but also globally,” he said.

Towards this end, he said UPM should ensure that its graduates possessed that much-needed global workforce skills - competency and dynamism – in line with the formation of the 2015 Asean Community which will witness stiff competition in the job market, particularly in the context of the demand for skilled and talented workforce.

A total of 7,056 graduates received their degrees and diplomas in the convocation which is taking place from October 31 till November 3. - UPM