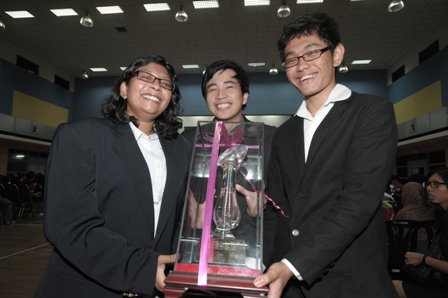 
SERDANG, 9 March (UPM) – Three students from the 13th residential college (K13) of Universiti Putra Malaysia’s (UPM) 13th College beat their peers from 16 other teams to emerge overall champions in the English debate of the university.

The K13 team, comprising Muhammad Iqbal, a freshman from the Faculty of Biotechnology, Alvin Lim, a second-year Chemical Science student, and Sivasni Krishnan, a junior from the Centre of Foundation Studies for Agriculture Science, out-talked and out-witted their peers in the series of rounds on every Friday, starting from October last year.

In the final round of the Inter College English Debate 16 (ICED 16), K13 beat the K2 team when debating on the motion, “This house would deny smokers access to State Healthcare” 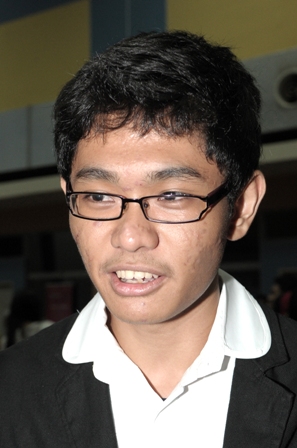 Muhammad Iqbal said they owed their victory to thorough planning and close guidance from their seniors who had represented Serdang Royal and who had helped them tremendously in honing their debating skills.

“The ability to counter-argue a motion and defeating the opponent’s case is crucial in earning points from the judges.

“The tips that our seniors had shared with us were significant and influenced our communication skills,” said Muhammad Iqbal, who was also adjudged the best debater of the tournament.

With that victory, K13 walked away with RM300 cash prize, certificates of participation and a challenge trophy, presented by the president of UPM’s Principal Council, Dr. Roselan Baki, who  was accompanied by the principal of the 16th College, Dr.Paiman bin Bawon. 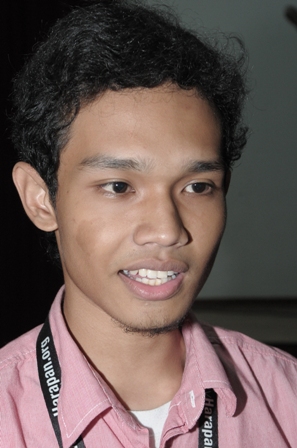 Participated by 150 students from 17 colleges in the university, the 7th edition of ICED 16 is an annual event which aims to hone the communication and English skill of the students, while allowing the university to handpick the best to represent UPM in other debating arenas.

The programme director of ICED 16, Muhammad Zulhafiz Syafiq Zulhilmi Cheng, said there was a difference in the organization system when compared to last year.

“This year’s competition did not fix any themes in order to have a flexible debating scope. The previous league system has been abolished and ICED 16 just concentrated on finding the best team for the championship title.

“ICED 16 also took the liberty of inviting debaters from other universities, such as Universiti Kebangsaan Malaysia (UKM) for a friendly debating challenge and for the sake of gaining experience,” he said. 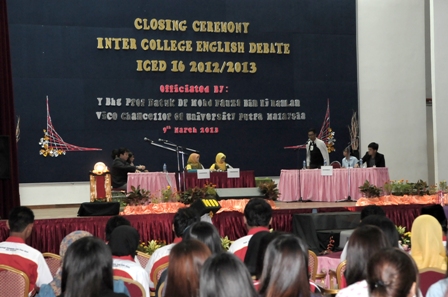