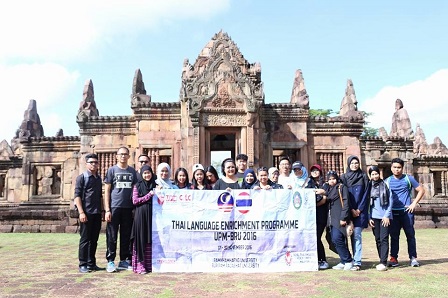 
SERDANG, Dec 3 – Thai Language students of Universiti Putra Malaysia (UPM) recently held a Thai Language Enrichment Program in Buriram, Thailand, to gain an insight on the use of Thai language.

Programme Director, Mohd Shahiran Mohd Sakri said the programme served as a medium for students to improve their proficiency of the foreign language with the local community.

"Throughout the program, we had to converse in Thai language because many did not speak English, leaving us with no choice but to learn and improve on the language,” he said.

Thai Language Lecturer, Jittima Jehmong said the program helped to open up the mind of students to learn and converse in the language not only in classroom but also when they communicate with the public.

"When learning foreign languages, there is a need to use the languages, understand the culture and personality of the place in order to get a grasp of the languages," he said.

At present, however, students only learn foreign languages solely for classroom purposes, without really having a deep understanding of the languages.

"The Thais were excited to find that our students could write, read and communicate in Thai language even a little bit, and this had given that positive impact to our students.

"Through this program, I hope that students will not only gain the experience but also able to converse fluently in Thai Language to strengthen the existing ties between the two countries," he said.