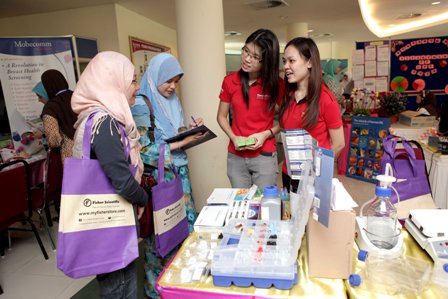 SERDANG, 7 July (UPM) – The researchers, clinicians and staff of the Medical and Health Sciences Faculty of Universiti Putra  Malaysia (UPM) held a research week recently to review their work and to re-boot their zeal with a focus on clinical research.

The two-day event from 25-26 June 2014, was filled with displays of their research outcomes, medical information and new devices, apart from a series of talks by local and foreign experts.

The research week, the third since 2012, was held in collaboration with Hospital Serdang, the industries and other faculties in UPM, said the lead organiser, Prof Dr Zamberi Sekawi, deputy dean (research and international affairs) of the Faculty of Medicine and Health Sciences. 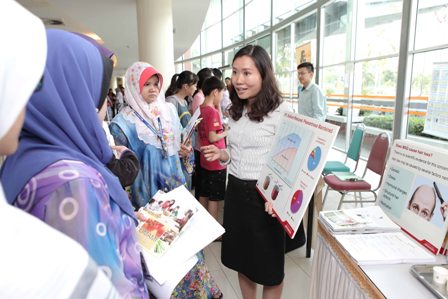 He said the research week was meant for the researchers, doctors, profesional and supporting staff to review their key performance areas, while celebrating their successes in research and studies.

“With this programme, we hope to inculcate the zeal for research and interchanges between the researchers, the academic officers and students.

“This would directly spark off the interest to collaborate, especially among the young lecturers and the clinical lecturers, and undertake research with the researchers available,” he said in his opening remarks.

He also said the inputs from the experts would add to the know-how of the participants while creating the scope for better rapport and even collaboration between the researchers, the clinical lecturers with those in the industries and other faculties. 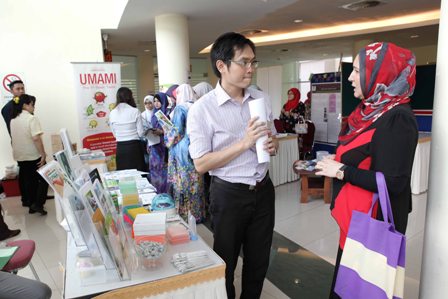 Dr Goh Bak Leong, head of the Clinical Research Centre of Hospital Serdang, in his talk on why clinicians should do research, said they were now targeting  the young clinicians for research work because the majority of the clinicians or doctors in the country were focussing on treating patients.

Unlike their counterparts in Singapore, he said most doctors here would shy away from research work or they were simply not interested.

“We are also more bureaucratic in recruiting clinicians and patients for research, compared to our neighbours in the south,” he said, re-counting his own personal experience in research and publication.

He noted that one snag faced by researchers here was the difficulty in recruiting participants.

Nevertheless, Malaysia is one of the 10 leading countries in Asia in clinical research work as Europe and the United States shifted their clinical trials to Asia for various reasons like lower costs, rising calibre of clinicians and medical facilities and naïve patients, said Ms Esdira Aijalida Jamaluddin, Communications and Relations Manager of Clinical Research Malaysia (CRM).

In her talk on an Update on Clinical Trials in Malaysia, she said the Malaysian Government took a pro-active role to encourage clinical trials, leading to a 57% jump in the clinical trials in less than 4 years.

The other countries are China where major pharmaceutical companies are investing heavily, South Korea which recorded one of the fastest growing countries for clinical trials, Hong Kong, Singapore, India, Japan, Philippines, Taiwan and Thailand.

The Malaysian Government had also shortened the timeline for regulatory and Institutional Review Board (IRB) approval, making it more conducive for clinical trials, said the officer from CRM  that was established as a unit within the Health Ministry in 2007 before it became a Government-own, corporatized non-profit body in 2012.

She said there are 12 institutional review boards and one centralised Ethics Committee in the country, including the Ethics Research Committee of UPM.

In terms of healthcare facilities in Malaysia, there are 132 public and 209 private hospitals, 8 special medical institutions, 50 public and 1,623 private dental clinics, 1,025 public and 6,675 private health/medical clinics. There also another 1,831 community clinics in the country. 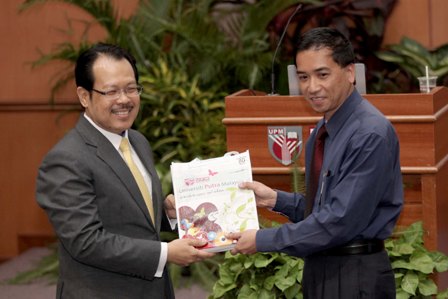 Assoc. Prof Dr Lim Kah Leong, head and principal research scientist of the National Neuroscience Institute of Singapore who gave a plenary talk on their research on Parkinson’s Disease, spoke about their multi-prong approach to develop neuroprotective and neurorestorative therapies for the dreaded disease.

Using flies for their laborious lab work, he quipped that they had found the cure for Parkinson’s Disease for the insects.

But on a serious note, he revealed that they were up-scaling their findings for clinical trials.

Dr Lim said that they had also found that some active compounds in green tea, coffee and red wine are capable of preventing Parkinson’s Disease.

He revealed that he was no stranger to UPM where he had been coming for  the last 10 years to see a close friend,  the late Dato’ Ir. Dr Radin Umar Radin Sohadi, the former Vice Chancellor of UPM.

The 5-year research and evaluation on the strategies to prevent road accidents that included Malaysia, started in 2010 and is coming to an end with the results being finalised.

Among the preliminary results is that law enforcement and legislation is more important in preventing road accidents than education, and that “acculturation” is important to road safety and that driving is a privilege, not a right.

“All crashes are predictable and preventable… that is why we are not using the word ‘accident’ to describe the vehicular incidents on the road,” he added. – upm/kgo