﻿﻿ Mathematics Is The Nucleus For The Other “hard “sciences, Says Visiting Don | Universiti Putra Malaysia 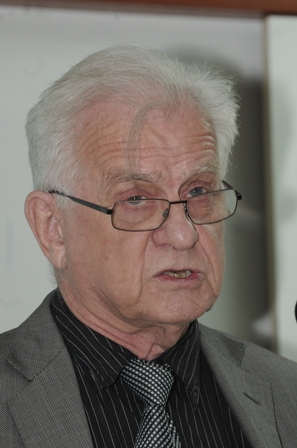 SERDANG, 17 April (UPM) – Mathematics is like the nucleus for the other “hard” sciences to revolve, says a visiting don from the University of Auckland, New Zealand.

“Engineering, which is the utilitarian counterpart of the traditional sciences, also uses mathematics in all aspects of what it does,” he said in a public lecture here today. His talk is specially tailored for a group of visiting secondary school students to Universiti Putra Malaysia (UPM).

Prof Butcher, who is a visiting professor at the Laboratory of Computational Sciences and Mathematical Physics of the Institute of Mathematical Research (INSPEM) of UPM, said increasingly mathematics was also becoming essential for an understanding of the social and biological sciences as well as finance and business.

“But behind these applications, new mathematics is being discovered all the time,” he said in his talk on “Why mathematicians count.”

Prof Butcher, 80, obtained his Bachelor degree in mathematics from the Auckland University College before earning his PhD in Physics from the University of Sydney, is  a mathematician specialising in numerical methods to solve differential equations.

He has two books and nearly 200 papers to his name, and for his lifetime work in the development of mathematics in his home country, he was awarded the Jones Medal by the Royal Society of New Zealand in 2010.

He said some of the new mathematics discovered had a particular purpose but some were important in their own right, increasing the richness of

“If we consider that these things matter then we might agree

that mathematicians do count,” he said.

of wheat every day for a year,” he said.

He said mathematicians would try to find formulae and equations to solve their problems, including for things that moved or changed, leading to differential equations.

Among other things, mathematicians would use differential equations to calculate where a projectile or bomb would fall.

They would want to have precise answer and where they could not, they would opt for numerical approximation through numerical analysis.

But mathematicians, he said, would want to find numerical methods that they could trust because they want accuracy, stability and efficiency. – upm