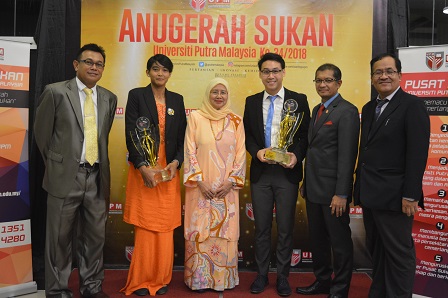 Each of them received RM2000 in prize money, a watch, a jacket, a certificate of appreciation, a personal trophy, a revolving trophy and a sponsored holiday, “Let’s Play ke Pulau Perhentian”, as well as T-shirts sponsored by Warrix.

The Rising Star Award (male) and Rising Star Award (female) were awarded to Muhammad Fitri Abdullah (Rugby) and Heng Kor Jin (Swimming), respectively. Each of them received RM1000 in prize money, a watch, a certificate of appreciation and a personal trophy, as well as a T-shirts sponsored by Warrix.