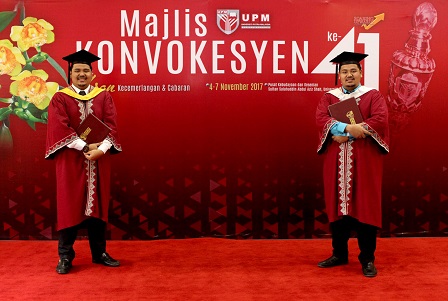 "After the final examination, I started work as a project manager at NanoMag Sdn. Bhd., marketing UPM's technology," Adrees said when contacted at UPM’s  41st Convocation Ceremony. Ariff, on the other hand, worked as the Head Unit for the Group Treasury Operation at RHB Bank headquarters.

As they are identical, confusion often arose among colleagues and lecturers when meeting them.

According to them, the secret behind their success is to be brave to connect with professionals and government bodies apart from getting extensive exposures to the outside world especially the workforce.