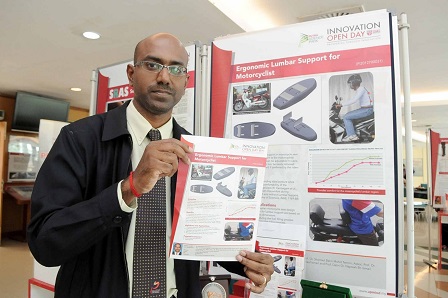 SERDANG, May 3 - Back pain and other form of discomfort that he had to endure when riding his moped motorcycle or popularly known as “kapcai”, to Universiti Putra Malaysia (UPM) from Tanjung Malim, Selangor, in 2010, sparked an inspiration for a lecturer to create an “Ergonomic Lumbar Support” meant for motorcyclists.

Dr. K. Karmegam, who is also a researcher at UPM’s Faculty of Medicine and Health Sciences, said he felt sharp pain on the lower back of his body due to the long distant ride.

“It then triggered my mind to create something like a tool, for instance, to be put on the seat so that we could lean against it for comfort while riding a motorcycle…something that could accommodate and support our body,” he said in an interview. 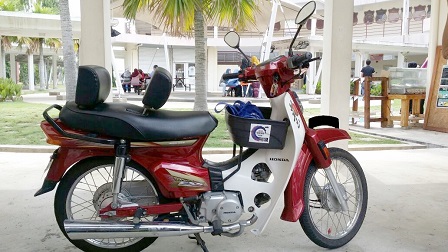 Saying he was then working as a lecturer at Politeknik Sultan Azlan Shah in Tanjung Malim, turned the idea into a project for his doctorate (PhD) he was doing at UPM.

He started to rigorously working on his innovative ergonomic lumbar support project for motorcyclists in 2010, and in 2013 he improvised his creation to include both motorcyclists as well as pillion riders.

He carried out modifications where a car headrest was used as the lumbar support. The seat of a “kapcai” motorcycle was punched to be fixed with the modified headrest which was removable if not needed.

In the initial stage, preliminary dummy testing was carried out on static motorcycles involving 50 male and 50 female riders, using an Electromyograph (EMG) to measure the muscular comfort level of pillion riders.

Questionnaires were also given out.

“Preliminary results showed motorcyclists were satisfied with the prototyped motorcycles as they could provide comfort at the lumbar section, that is the lower back of the body, thus reducing frequency of changes in bodily posture while riding.

"This proved that it could reduce more than 50 per cent of discomfort," said Dr. Karmegam who used to ride his “kapcai” motorcycle all the way from Tanjung Malim to go back to his home town in Serdang, Kedah. 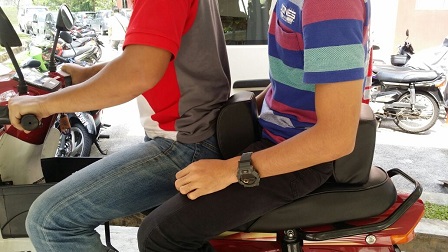 According to him, previous study showed that motorcyclists in Malaysia always showed signs of discomfort in some parts of their body, especially the lumbar section.

Therefore, he said, this section should be supported by a back rest.

His invention won a silver medal during the BioInnovation Awards and PRPI Research and Innovation Exhibition in UPM in 2010 and 2014. The prototype has since been patented.

He is currently in the process of designing a pillion seat for children which will come complete with a hand holder and footrest. – UPM.