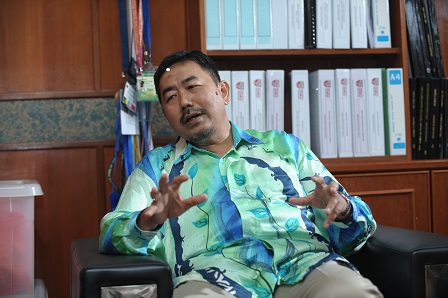 SERDANG, March 12 (UPM) – Rehabilitation efforts should be intensified to prevent further degradation of peat swamp forest areas. Such efforts will also see reduction in the risks of fire and  haze that often occur during the drought season.

"Peat swamp forests are part of an important eco system that has various functions including controlling the supply of eco system services such as water and carbon storage.

"The fire in the peat swamp forest areas would destroy biodiversity and could also release particles, causing the haze," he said in an interview.

He also said any development near to those areas should be supervised more closely to avoid encroachment activities.

In fact, it is better to setup buffer zones to prevent illegal affairs.

He said, at the same time, exploration of the peat swamp forests for agricultural purposes should be curbed as well as building canal and drainage systems in the peat soil area –as it would just drain out the water in the soil, causing it to become drier.

Commenting on the risk of forest fire this year, he said despite the hot weather that some states are experiencing with lower rainfall intensity than usual from January to March, this intensity rate, however appears to be higher than the average rate in the same corresponding period of time last year. Last year, a long dry season had caused many forest fires.

"This year is better than the last... last year's dry season was longer," he affirmed. Temperature in February and March is usually higher due to less cloud at the end of the Northeast Monsoon season.

He added this year's El Nino phenomenon is expected to be weak, but all the necessary precautions should be taken into account during low rainfall as it could be the cause of forest and bush fire.

According to Dr Ahmad Ainuddin, forest and bush fire, especially in the peat soil areas usually occur in July and August, resulting in hazy weather condition.

He said said recent climate trends in this country have always been changing and individuals or parties concerned should be prepared to make early preparations in coping with possible weather conditions such as drought.

"Being alert can reduce peat swamp forest fire and hazeoccurances," he said. - UPM