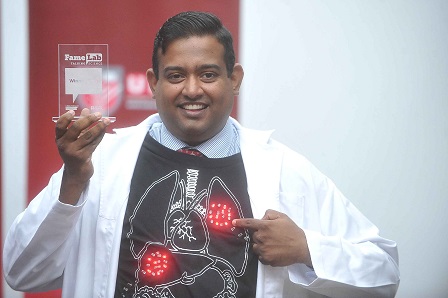 SERDANG, June 20 - Presenting and explaining solid facts on cancer within three minutes in a simple language so that it can be understood by the general public is very challenging, said Dr Abhimanyu Veerakumarasivam who won a prestigious science communication competition, Famelab International 2016, in Cheltenham, United Kingdom, recently.

This lecturer-cum-scientist at the Faculty of Medicine and Health Sciences, Universiti Putra Malaysia (UPM), said within that brief moments, he had to convince judges of the competition.

Dr. Abhimanyu beat more than 2,000 scientists from 27 countries to emerge the winner of the World’s Best Communication Scientist Award at Cheltenham Science Festival. The finals featured a total of 12 scientists.
He picked a topic on genetic cancer that suited with his expertise in the specialized field.

“That three minutes’ slot given to us to explain to the general public, is actually too brief as there were just too many information to be shared. I had to be wise in presenting a compact yet detailed description and I used analogies so that it is better understood and clearer.

“When delivering lectures in the classroom, our objective is to deliver what we understand but here, we have to give not just what we understand but also communicate what needs to be known by the public,” he said, adding that he was picked to join the competition after winning a national-level contest last April.

Dr. Abhimanyu, who is also Chairman Young Scientists Network - Academy of Sciences Malaysia, added that participants also had to answer questions posed by juries during a question-and-answer session which lasted for about five minutes.

After he was selected among 12 others who qualified for the final, he said, he was determined to do his level best as other participants also had an equal chance of winning.

"I was utterly shocked and did not expect that I could win.

"Whatever it is, we must always believe in whatever that we do. The slogan 'Malaysia Boleh' holds dearly to me and it is very meaningful. We must instill in us that not only we can do it but we can also do it at the international level,” he said.

FameLab is the world’s largest international competition for scientists, aimed at encouraging the latter, technologists, engineers and mathematicians to share their expertise and knowledge in a language that is easily understood by the general public, all within three minutes. – UPM.