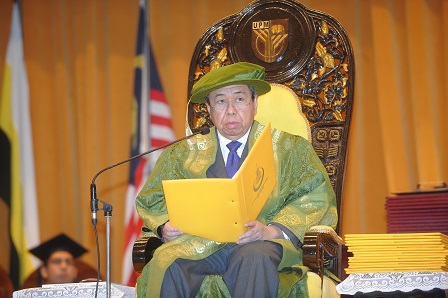 SERDANG - Graduates should be bold enough to take the risk and come out of their comfort zone to challenge their own self to be a better person.

Universiti Putra Malaysia (UPM) Tuanku Chancellor, Sultan Sharafuddin Idris Shah said that graduates should prove their intellectual ability by being able to guide the society to prepare them for future challenges.

“Get out of the ordinary frame of mind and mould new thinking that can challenge the norm to assist the country to be a developed and sovereign state.

“I wish to remind our graduates that a university serves as a platform to transform the mind,  for you to think out of the box , understand the direction and those virtuous and noble aspirations,” His Royal Highness said at UPM’s 39th Convocation at the Main Hall of Sultan Salahuddin Abdul Aziz Shah Art and Culture Centre which is being held from October 31 to November 3, 2015.

The ceremony saw the graduation of 7,056 graduates, of whom 469 are PhD holders, 1,860 Master’s degree, 4,299 Bachelor and 428 Diploma, with the number of PhD holders the highest to have been produced by a public university in Malaysia.

Sultan Sharafuddin, who is also the Sultan of Selangor, said in line with UPM’s slogan “Agriculture. Innovation. Life”, UPM had set up a National Food Security Centre to overcome the problems relating to food supply in Malaysia.

“Towards this end, UPM has held various new programmes in the field of agriculture engineering, economic agriculture, production and processing that can assist the nation in providing the needs for food and farming,” he said.

Sultan Sharafuddin also called on universities to attract world’s renowned experts to work with them.

“Graduates should understand and tackle the problems faced by the community head-on instead of doing so via the cyber world and borderless technology,” he added.

Sultan Sharafuddin also expressed his hope for UPM to continue to be at the forefront of agriculture niche by giving direct impacts to the society and the country. 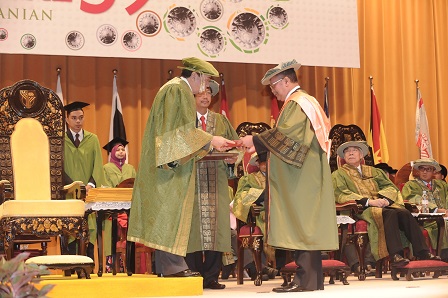 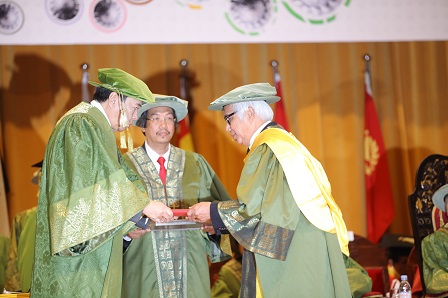