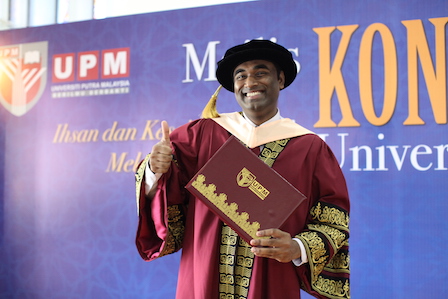 SERDANG, 28 OCT- The recipient of ‘Tokoh Saudara Kita’ in conjunction with the Maal Hijrah Selangor 2016, Muhammad Adnan Pitchan, 32, dedicated his Doctor of Philosophy (PhD) conferred today at the 42nd Universiti Putra Malaysia (UPM) Convocation Ceremony to his parents who were not able to attend the ceremony.

“My father is not able to attend because he has to take care of my mother who is fighting heart disease. However, I know that they are proud of my achievement today, and they have provided me with a strong support during my studies,” Adnan said when he received the PhD in Mass Communication by himself.

Adnan is from Sijangkang, Tanjung Karang, Selangor, and he said that his interest in Islam started to grow when he was in Form 3 at SMK Teluk Panglima Garang. Even though he studied Moral Studies, he frequently asked his Muslim friends about Islamic studies.

“I started to embrace Islam in 2009 when I heard the nasheed ‘Demi Masa’ sung by a group, Raihan. At that moment, I teared without realising it.

“At the beginning, my parents were not able to accept the reality. For about almost two months I felt like I was being ignored, but I kept explaining to them that even though I embraced Islam, my parents would still be my priority.

“Eventually, they were able to accept the situation. They even reminded me from time to time if I have done my prayers at home.” He mentioned that since embracing Islam, he felt closer with his parents and had more frequent phone conversations with his parents compared to before.

In 2016, Adnan received a pilgrimage package at the Award Ceremony of Maal Hijrah Selangor 2016. “Therefore, I performed my pilgrimage in 2017, and one of my prayers in the holy land was that my parents would receive guidance one day,” he said as he wiped his tears away. - UPM