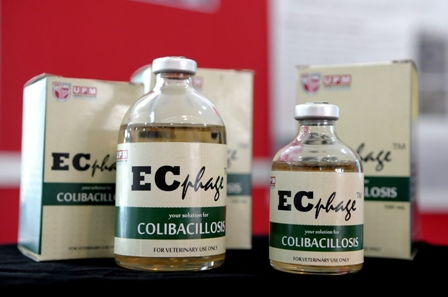 SERDANG, 3 July – A group of researchers have developed the ECPhage natural biological treatment for colibacillosis infections caused by Escherichia coli (E. coli) bacteria that affect the respiratory tract in chickens.

Having found that  E. coli bacteria is resistant to traditional antibiotics,  Prof Dr. Sieo Chin Chin of the Faculty of Biotechnology and Biomolecular Sciences (FBSB) took the initiative to produce ECPhage to prevent the spread of E. coli and reduce mortality rates of infected chickens by up to 70%.

She explained that  ECPhage, derived from natural biological materials is very specific to the target host (E. coli bacteria) and does not cause any side effects to the chickens or the environment. “The main ingredient in ECPhage is bacteriophage or phage. It is a virus that will only attack certain bacteria and can be applied to all layer and broiler chickens at various ages,” said Prof Sieo.

“ECPhage can be given through poultry drinking water or sprayed to the environment in order to reduce the bacteria population," she said in her speech at the Putra Cipta Press Conference.

Prof  Sieo also explained that during the ECPhage application, it will recognize E.coli bacteria in the chicken body and absorb it.

“Bacteriophage will replicate inside the bacteria then it will burst to release new bacteriophage. The process will continue and eventually eliminate all the bacteria,” she said.

Prof Sieo also explained that when several poultry areas are infected by E.coli bacteria, the mortality rate is high and the percentage of recovery of the infected poultry is low. Even if a chicken recovers, there will be significant loss of weight, thus leading to loss for the breeder.

According to Prof Sieo, ECPhage can overcome the problem with efficient reduction of E.coli. Research has shown that the chicken mortality rate can be reduced and the weight of the chickens increased by a little more than 15% compared to untreated chickens.

“Besides, the number of E.coli in the chicken lung is 22 times lower than in untreated chicken while the recovery rate of the treated chicken is also high” she revealed.

The researcher also clarified that ECPhage has a short reaction cycle of only 25 minutes and only one t dose is needed compared to the use of antibiotics which requires the infected chickens to  be quarantined and treated over 5 to 10 days.

ECPhage won a gold medal at the 23rd International Invention, Innovation and Technology Exhibition (ITEX), Kuala Lumpur which held on 17 to 19 May for Prof. Sieo and her research team.

It was also a gold medal winner at the Malaysia Invention Research and Innovation Exhibition (PRPI), UPM 2011 and received the Excellence Award and New Product Expo (INPEX) in the same year.

With such impressive recognition, Prof Sieo believes that ECPhage will be in great demand by poultry farm operators in Malaysia.

According to the researchers, the production cost is no more than that of the current treatment, would be cheaper if produced on a large scale.

Also, Ecphage can be used not only in Malaysia but also in other regions. This product is easily produced and shelf-life is up to six months with proper refrigeration, thus making it feasible for export.