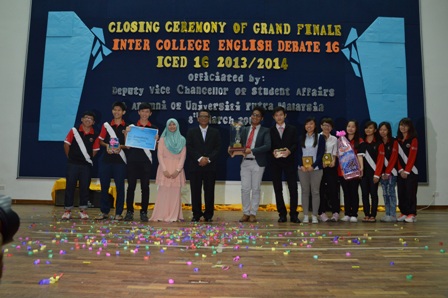 The trio of Muhammad Haikal b. Hikmal Hazam,  Tee Keng Hong and Joanne Lee Chelyan had impressed the judges and out-witted their opponents from the 11th College in the grand finale on March 8, 2014.

Students from 14 out of the 17 hostels or colleges in Universiti Putra Malaysia (UPM) took part in the series of debates, culminating in the final between the 2nd and 11th college, said Farah Liyana bt Md Safian, a 2nd year Bio-Tech student staying at the 16th College who is the director of the debate. 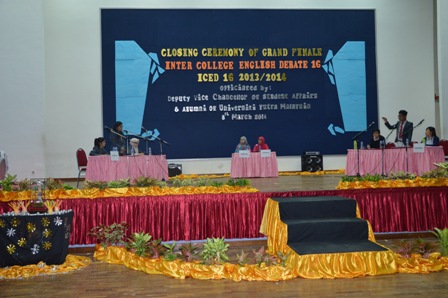 She said Muhammad Haikal also emerged as the best debater and the winning team received trophies, dictionaries and RM300 from the sponsor, Oxford Fajar, a book publishing and distributor company.

The Inter-College English Debate (ICED 16)  has been traditionally organised by the 16th College and is meant to encourage the use and enhancement of the English language among UPM students.

It is also meant for the students to hone their public-speaking and debating skills besides improving their general knowledge.

The members of the two debating teams are:

Dr. Paiman bin Bawon, the principal of 16th College, congratulated the winners and the organising committee members and he hoped that the ICED16 would be a trademark event of the 16th College. – UPM/ - flms/kgo