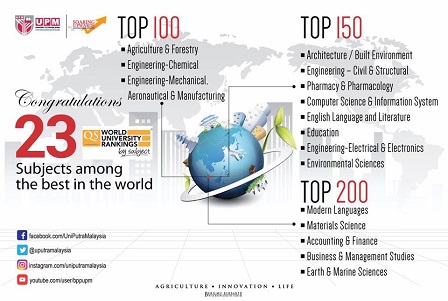 SERDANG  - Universiti Putra Malaysia (UPM) suceeded in boosting the positions of 16 of its subjects when they were ranked in the world’s top 200 in QS World University Rankings by Subject 2017 which was announced on March 8, 2017.

UPM improved in terms of the number of subjects, from 15 last year to 16 this year, and it was also placed among the world’s top 100 in Agriculture and Forestry subjects, a position it has held for five consecutive years, and other subjects - Chemical and Mechanical Engineering,  Aeronautical & Manufacturing - where it was ranked against more than 4,000 universities worldwide. Adding feather in its cap was when 23 other subjects were listed as the world’s top 400 compared to 19 subjects last year.

UPM Vice-Chancellor, Prof. Datin Paduka Dr. Aini Ideris congratulated all staff and students who were behind the successes of UPM’s entities in improving its performance  in the world rankings.

"The jump in the number of subjects to 23, our ability to maintain Agriculture and Forestry subjects in the world's top 100 for five years in a row and the listing of two more subjects in the world’s top 100 are successful achievements that UPM can be proud of due to stiff competition and better performances put up by other regional institutions.

"UPM continues to make further improvements when eight of its subjects compared to five previously are ranked in the world’s top 150.
“Our accomplishments in Agriculture and Forestry subjects are attributed to the efforts by the Faculty of Agriculture, Forestry Faculty, Veterinary Medicine Faculty, Science and Food Technology Faculty, Faculty of  Food Science and Technology and other UPM institutes that fully support the field of Agriculture and work hard to make UPM successful in carving an international reputation for its academic standards and quality of graduates.”

“Strengthening of strategic partnerships with the industry, government and alumni, including international institutions in promoting excellence of internationalization initiatitives has enhanced our contributions for the Malaysian agenda and made further inroads for UPM to face global competition,” she said.

Among the ranking criteria , said Prof. Datin Paduka Dr. Aini , were strong profiling of academicians, high-impact researches, extensive development and teaching of education to the public and employers’ recognitions for graduates around the world.
"Improved performances by UPM’s faculties and institutes in teaching, research, publications and national and international networks have also helped with the rankings," she said.

"Rating and emphasis on academic research quality and number of publications in leading journals, and high number of citations and H-Index, have shown an increase of late.

"As far as teaching is concerned, the revised curriculum focuses not only on the main courses but also additional programmes that could help improve graduates’ soft skills,” she added.

More information on the results of QS World University Ranking 2017 can be obtained at https://www.topuniversities.com/subject-rankings/2017.