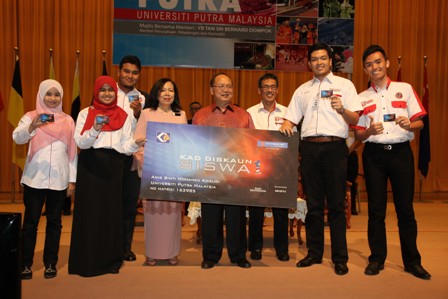 SERDANG, September 5th – Newly-enrolled students for the 2012/2013 session at Universiti Putra Malaysia (UPM) were given an overview of the advantages of joining industry and the commodity sector after graduation.

He revealed that “At present, only 30 percent of the vacancies for researchers are occupied at the ministry. The demand for this position is still very high in the country.

“There are many job opportunities in research for graduates not only in the government sector but also in private corporations,” he said at the Mentor Minister programme held in conjunction with the Orientation Week for the new students.

At the same event, UPM’s Vice Chancellor, Dato’ Ir. Dr. Radin Umar Radin Sohadi disclosed that out of 79,000 students who had applied for admission to UPM, only 3000 made the cut.

“Being brilliant students is not only about being academically inclined, but also being able to think creatively and critically, demonstrating high discipline throughout the teaching and learning process,” he said.

The Minister Mentor programme is a series of outreach programmes involving students in Public Institutions of Higher Education and Tan Sri Bernard has been selected as a Mentor Minister to UPM.

On a separate subject, in conjunction with the launching of the 1Malaysia Student Discount Card by Tan Sri Bernard, five deserving UPM students received incentives to assist them financially while studying at the university.