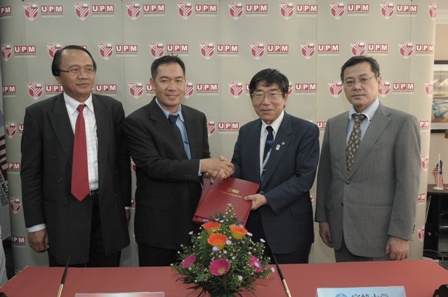 SERDANG, 1 July (UPM) – Universiti Putra Malaysia (UPM) has signed two collaborative pacts with the University of Miyazaki (UM) of Japan here today to pave way for the exchange of students and academic researchers between the two universities.

The two pacts – the Agreement on Academic Exchange and the Memorandum on Student Exchange between Universiti Putra Malaysia and the University of Miyazaki  -- are to be valid for five years.

They were signed by Prof Dato’ Ir Dr Mohd Saleh Jaafar, Deputy Vice Chancellor (Research and Innovation) on behalf of UPM and Prof Dr Tatsuo Suganuma, president of the University of Miyazaki. 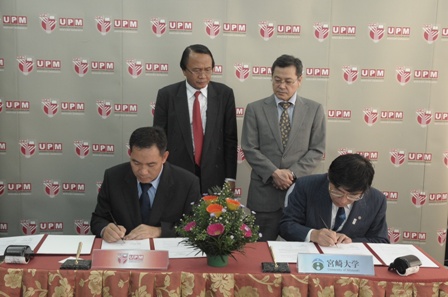 Under the arrangement on student  exchange, the two universities agreed to host a maximum of three students a year from their partner university where they would waive all fees, while the exchange students would be responsible for their own expenses including travel, accommodation and insurance fees.

During the duration of stay of not more than one year (which can be extended), the exchange students can attend lectures, seminars and tutorials where the host university would evaluate their academic performance according to its own rules. 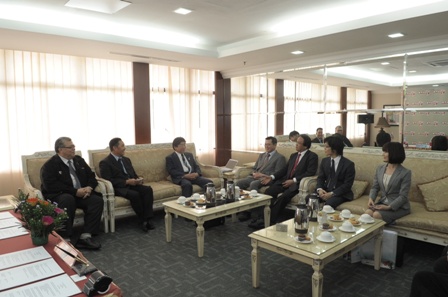 The pact stipulates that specific details on each of the exchange area would be negotiated and agreed between both universities before implementation.

The expenses to be incurred in the implementation of the agreement should be the responsibility of each university, unless another arrangement is agreed upon by the two parties.

The University of Miyazaki  is a national university in Miyazaki Prefecture in southeastern Kyushu island, facing the Pacific Ocean.