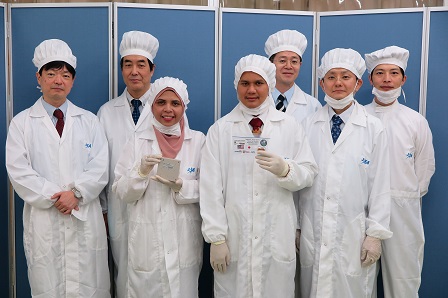 JAXA will deliver UPM’s radiation detector to the United States next month so that it can be launched to ISS in February next year.

The smart fibre optic detection sample is known as the Smart Optical Fibres for Passive Dosimetry in Space (SOFPADS).

UPM has two samples for the experiment, namely, the E-SOFPADS and I-SOFPADS. Each sample will be tested for 300 days and 360 days, both inside and outside of Japan Experiment Module (KIBO), ISS to determine the reaction of the fibre optic in microgravity against the radiation level of the astronauts working in the ISS.

After a year, both detector samples will be returned to the Earth to be analysed by UPM at the Centre of Diagnostic and Nuclear Imaging and the Dosimetry Laboratory, Faculty of Medicine and Health Sciences.

UPM's head researchers are Dr. Noramaliza Mohd Noor and Associate Professor Dr. Fathinul Fikri Ahmad Saad, both from the Centre of Diagnostic and Nuclear Imaging and Dr. Nizam Tamchek from the Faculty of Science. Joint researchers are from Faculty of Engineering UPM, Multimedia University, Universiti Malaya and Sunway University. 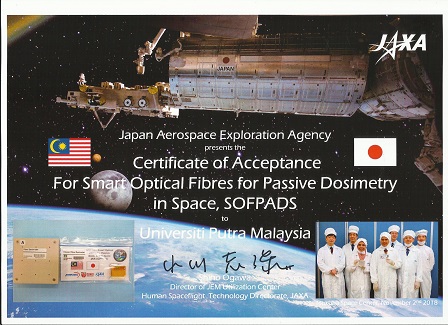 The research project, known as 'Exposure Experiment Using Experiment Handrail Attachment Mechanism and the Passive Dosimeter for Life Science Experiments in Space on the Japanese Experiment Module' is a collaboration with JAXA under the agreement between UPM and Jaxa and coordinated by the National Space Agency (ANGKASA).

At the SOFPADS handover ceremony by UPM scientists to JAXA held on Nov 2 here, Dr. Noramaliza, who represented UPM, handed over SOFPADS which will be sent to ISS to Shiho Ogawa, the Director of JEM Utilisation Centre of JAXA and Board of Directors of Human Space Flight Technology, JAXA.

The project, sponsored by UPM under the High Impact Grant, is the first step taken to observe the response of fibre optic towards radiation in a microgravity environment as well as its potential as a passive radiation detector for use in space.

These passive radiation detectors are commonly used in the monitoring of radiation levels absorbed by astronauts working on the ISS.

Following the submission of the samples in Tsukuba, Dr. Noramaliza and Associate Professor Fathinul Fikri also shared their experience and the challenges faced in conducting the project at the Asia-Pacific Regional Space Agency Forum (APRSAF-25) on November 7, 2018, at Sheraton Hotel, Singapore. - UPM