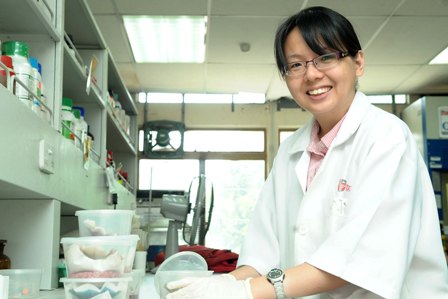 Ms Low May Lee, 26, who had started on her PhD in synthesis programme at UPM in 2010, was granted the Eramus Mundus: MAHEVA scholarship to continue her doctoral research under Prof. Clotilde Policar at the Laboratoire des BioMolecules of the Universite Pierre et Marie Curie (UPMC) in Paris for 22 months in November 2011.

A student of the Air Panas Setapak Girls School in Kuala Lumpur, she had graduated with a 1st class degree in B.Sc (Chemistry) from UPM in 2010 where she was also awarded the university’s Highest Academic Achievement in Chemistry.

To obtain her PhD from both UPM and UPMC, she had to spend one-and-a-half-year in each of the two laboratories to focus on her research project on the synthesis, characterisation and biological activities of dithiocarbazate-Schiff base ligands and their metal complexes.

In short, she was interested in seeing how metals can be used in the manufacture of drug to kill multi-drug resistant bacteria.

The nine main species of bacteria like e.coli (that causes food poisoning) and p. aerogenosa (found in hospitals), she noted, had evolved to be resistant to various drugs and the focus now is on metallodrugs.

She said the mobility between the labs in Paris and Serdang had given her the incredible opportunity for her research. “ I was able to introduce pioneering synthetic methodology to prepare improved therapeutic agents on the class of compound that the group in UPM has been studying for the past decade. 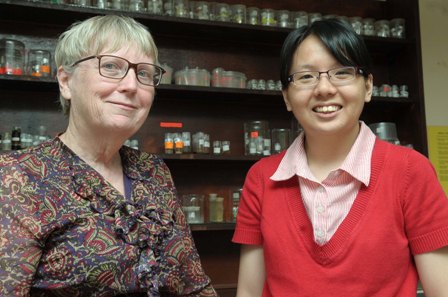 “In addition, the biological evaluation and various physico-chemical/spectroscopy characterizations carried out with collaborators in France had opened a new window of understanding towards the discovery of potential metallodrugs.”

The eldest of two daughters to an electrician, a Baba who hails from Melaka and a mother who works as an administrative staffer, Ms Low said she has a basic command of French and could only get along with the language while in Paris. But she was “fortunate enough” to have help from the people around her.

While waiting for her convocation, she is at present eyeing for a research fellow position to further her dream, most probably somewhere in a lab overseas.

She had successfully passed her PHD thesis defence via video-conference between UPM and UPMC with the jury comprising examiners from both countries.

While her supervisors in UPMC were Prof Policar and Dr Nicolas Delsuc, her mentor and major supervisor in UPM was Prof Karen A.Crouse of the Chemistry Department of the Science Faculty.

She is the 2nd Malaysian to obtain the twin Franco-Malaysian doctoral degree since the cotutelle or jointly supervised degree was started with French collaboration in 1999.

Dr Afidah Abdul Rahim of Universiti Sains Malaysia was the first Malaysian to be awarded the cotutelle twin degree when she completed her PhD at the Henri Poincar University (UHP) from 2002 to 2005.

At present, there are a dozen Malaysian students pursuing twin degrees under the MAHEVA programmes, comprising one UPM under-graduate student, two UPM Masters’ students, six UPM doctoral students and two UPM staffers. The others are one Universiti Malaya and one UiTM doctoral student. – UPM/kgo