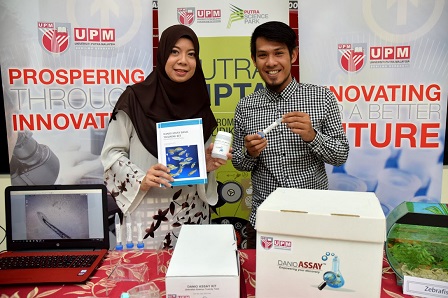 SERDANG, August 29 - A team of researchers from Universiti Putra Malaysia (UPM) has succeeded in developing an easy-to-use, fast and cost-effective kit for rapid toxicity screening of chemicals or compounds using ornamental zebrafish.

Called “Danio Assay”, the kit was developed using the embryos of Zebra Danio fish,  scientifically known as “Danio Rerio”,  to determine the level of toxicity of chemicals in daily goods, especially food, cosmetic and medicine.

UPM Biochemical Department Lecturer from the Faculty of Biotechnology and Biomolecular Sciences, Dr. Syahida Ahmad, who led the team of four researchers, said toxicity testing was conducted to obtain preliminary information on the possible side effects of short-term acute toxicity or long-term chronic toxicity of chemicals and drugs on humans.

“The toxicity effects of chemicals can be seen through the development of zebrafish embryos which is similar to humans at the fetal stage, before and after birth, and can be monitored until they reach adolescence and adulthood.

"This fish is an important alternative to rats and other guinea pigs as models for toxicity testing because zebrafish has about 80 per cent of gene sequences which are similar to human genes,” she told a press conference here.

She added that the development of zebrafish embryos was similar to humans, except that the embryo development was 50 times faster, with the embryonic development taking place outside the mother’s luminous abdomen.

Therefore, she said, monitoring of embryonic development can be done without having to kill the mother or the embryos.

She added that compared to animals such as mice, researchers can do testing on zebrafish embryos at a lower cost and get the results in a shorter time.

“A female zebrafish can produce hundreds of embryos at one time compared to a rat that can give birth to only a dozen pups. This can reduce the time and increase the number of tests and accuracy of the data.

Dr. Syahida also said an important feature of the kit was the use of luminous zebrafish embryos which enabled testing to be done efficiently and accurately.

“Bioluminescent gene that has been isolated from the bacteria was inserted into zebrafish embryos. Genetically modified zebrafish embryos (transgenic) were used as animal models,” she said.