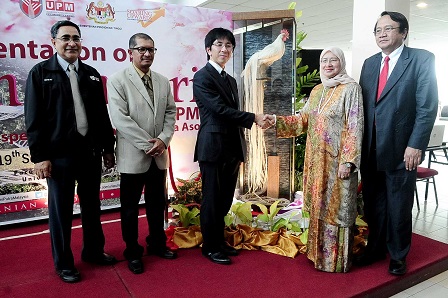 SERDANG, 19 Sept – Universiti Putra Malaysia (UPM) has received an Onagadori, a fowl with the longest tail in the world, from the Japanese government as a symbol to commemorate the university’s strategic partnership with Kyushu Economic Federation (Kyukeiren).

The Onagadori which originates from the Kochi Prefecture, Japan is a species of fowl which is protected by the Japanese government and is considered as a Living Cultural Monument of Japan.

In an official ceremony at the Faculty of Veterinary Medicine, the mounted Onagadori was presented by the Education and Science Attaché, Ichiro Kuronuma, representing the Japanese Ambassador to Malaysia, Makio Miyagawa.

In a recorded video message, Yutaka Aso hopes that the Onagadori exhibition at the Animal Anatomy Museum, Faculty of Veterinary Medicine UPM would symbolize the friendship between UPM and Kyutech.

The Onagadori comes in various types such as black-red, black-silver, black-gold and white. It is created from another Japanese fowl, the Shokoku. The gene for the extended tail feathers is a mutation from the Shokoku fowl and cross-breeding.

Japanese entrepreneurs have to undergo a long process in breeding the Onagadori.  Special shelters, and grooming called “tombaku” are some of the normal practices done to encourage long feather growth under the best conditions.

The “tombaku” will protect the feathers as well as inhibit conditions that will cause new feather growth and encourage the growth of tail feathers at 3 feet per-year. 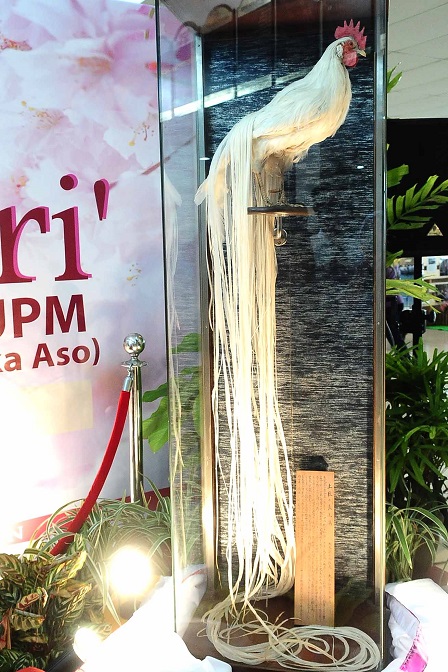 The Onagadori chicken is the most unique fowl among the 20 indigenous birds of Japan where its tail grows continuously through its lifetime, achieving lengths of over 7 meters. The longest tail in the world is recorded at 13.5 meters.

Initial efforts to bring back the Onagadori began in 2012 during a visit by Prof. Datin Paduka Dr. Aini Ideris to Kochi University to sign a memorandum of understanding, and included in the agenda is to initiate collaboration in the research on the Onagadori.

As an expert on avian vaccination, she expressed an interest in the Onagadori during a visit to the Onagadori Centre in Nankoku City. However, due to restrictions by the local government, the Onagadori could not be exported from Japan.

Prof. Datin Paduka Dr. Aini Ideris visited Japan for the second time this year to promote international cooperation with Japanese higher education institutions and to sign a memorandum of understanding with Kyushu Institute of Technology, Kochi University and Hiroshima university as well as a reciprocal visit to the office of Aso on 11 April, 2017.

On 27 March 2015, the president of Aso Cement Co, Ltd, Yutaka Aso, who is also the younger brother of the Deputy Prime Minister of Japan, Taro Aso, had visited UPM with 50 delegates from Kyukeiren and Kyushu Institute of Technology.

The meet was to share the accomplishment of UPM in the halal industry with the Kyukeiren delegates, and to discuss industrial training in Japan for UPM students.

The deep interest shown by Datin Paduka Aini and UPM towards the Onagadori for more research into its features and characteristics for further understanding was acknowledged by Yutaka Aso.