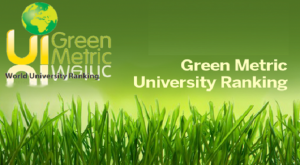 Serdang, January 19, 2015 - Universiti Putra Malaysia (UPM) is placed 41st, based on its campus sustainability efforts and environmental management, in the latest UI-GreenMetric World University Ranking which was published recently.

UPM Vice Chancellor, Prof. Dato' Dr. Mohd Fauzi Ramlan, when commenting on the success, said it was the UPM’s commitment to the conservation and preservation of the environment through various undertakings, such as teaching, research, extra curricular activities and quality management system based on effective environmental management.

"UPM managed to scale up in the ranking, particularly in the transportation and infrastructure indicators such as size and green space infrastructure, in addition to facilities improvement, efficient energy and on-campus bicycle use.

"UPM is the 3rd best university in the Southeast Asian region and the 4th in Asia after the National University of Singapore, National Pingtung University of Science & Technology and Chulalongkorn University," he said.

In this year, seven local universities participated in the UI-GreenMetric Ranking compared to four last year.

For more information, the UI GreenMetric World University Ranking performance reports can be reached at: http://greenmetric.ui.ac.id//ranking