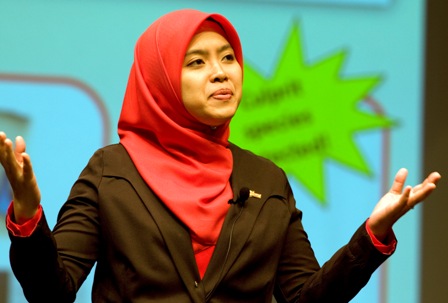 She added, through the research, the biomarker or protein-based DNA marker, was used in detecting the presence of non-halal substance more quickly and easily operated while analysing the meat.

"This biomarker research began with pork because it was a major concern in halal issues before proceeding to other species such as horses, goats and other meat products which could potentially be a taboo in some cultures in the world.

"In the future, this biomarker will be able to be used by food control laboratories to assess the authenticity and detect fraud in meat-related products," she said.

The mother of two children was also confident that the field of halal industry had a huge potential to go far based on the present demands.

"Halal needs are not only required specifically for Muslims, but also from other individuals when it comes to food security aspects," she said. 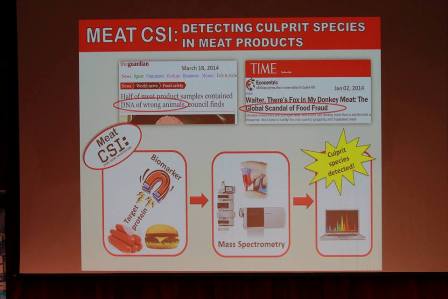 Prior to that, she also commented on the 3MT, the international competition that used public speaking concept and was also competed by other Ph.D students from all parts of the world.

At first, she admitted in not taking the competition seriously as she only managed to win third place at the university level in December 2013.

"I managed to qualify at the national level, of which the competition was held at Universiti Teknologi Malaysia (UTM), then I was picked by the School of Graduate Studies (SGS) to represent UPM in the competition, which took place at the University of Western Australia. 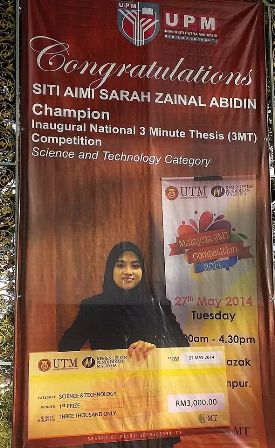 "This moment is one of the best achievements, although I only managed to be one of the finalists. The competition was fierce in the final round because all participants were great. I am also grateful to my husband, my supervisor, Dr. Awis Qurni Sazali, lecturers from the Faculty of Modern Languages and Communication, Faculty of Medicine and Health Sciences and SGS officers who helped me to get to this stage.

"Eventhough it is frustrating for not winning it, I am still proud as the sole representative from Malaysia who managed to make it to the final round in this international competition", she said.

She added, the students were required to present their Ph.D researches in a way that could be easily understood without being overly technical within three minutes to an audience with various science and social science backgrounds.

The judges were made up of businessmen, stakeholders as well as school students who attended the competition.

Siti Aimi Sarah also shared tips with students who were interested in participating, one of them was, comprehensive understanding in the research conducted.

"Students should also be able to identify potential contributions to the public, methods in resolving issues from their research outcomes, the delivery should be convincing and always interact with the audience," she said.

Meanwhile, the competition was initially introduced by the University of Queensland, Australia in 2008 and UPM was the first university in Malaysia to have organised such a competition at the university level in 2012.

Curtin University was crowned champion in the 3MT Competition 2014, represented by Sarah Marley with a speech titled Say What? Coastal Dolphins and Noisy Environment and the runner up was the Australian National University, represented by Rosanna Stevens with the presentation of Now You See It.