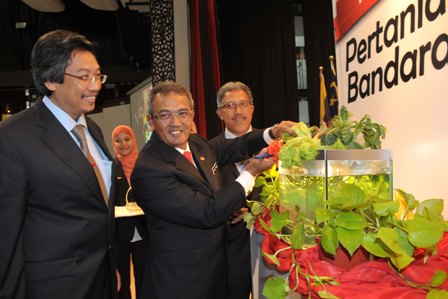 SERDANG, 10 April (UPM) – Universiti Putra Malaysia (UPM) has launched Urban Agriculture in its effort to encourage city dwellers to carry out modern farming
activities in the limited spaces of their homes as a guaranteed source of food for the nation by 2020.

UPM’s Vice-Chancellor, Prof. Datuk Dr. Mohd Fauzi Ramlan, in his message to about 1,000 staff and students of the university said in line with this, UPM would become a food excellence centre in guaranteeing food and agriculture for the urban areas.

”UPM’s new focus is a contribution in transforming Malaysia as a dependable food producer. This initiative will not be carried out by UPM alone but with the co-operation, and by leading, the other public institutes of higher learning and research institutes involved in agriculture.

”The utilisation and transfer of technology like direct farming, information and communication technology (ICT), enhancing the quality of seedlings, growing technique, fertigation and production, biotechnology and mechanisation have to be upgraded in the modernisation and transformtion of agro-food industry.

”As long as we do not manage to decrease our dependency on food import we will forever not be able to control the price of food more effectively,” he said in a keynote  address  in conjunction with his 100 days in office as the 7th Vice-Chanccellor of UPM, here today.

He said UPM would create an agriculture’s showcase as a reference centre for industry and farmers. Development activities and experts clinics would be organised more comprehensively so that technology transfer programmes get the desired impact.

Besides that, he said UPM would increase students involvement through volunteer programme by way of technology transfer in order to make urban agriculture and agriculture in the suburbs a reality.

Later at the function, he handed over a cheque for RM12,863 raised by the students to a representative of Media Prima Berhad for the Lahad Datu Fund.

He also launched a book ”The Journey of Passion: UPM AACSB Story” that highlighted the moves by UPM’s Putra Business School and the Faculty of Economics and Management to obtain the prestigious Accreditation of Association of Advance Collegiate Schools of Business (AACSB) .

The Vice-Chancellor also listed the university’s achievements in 2012 in the following areas: 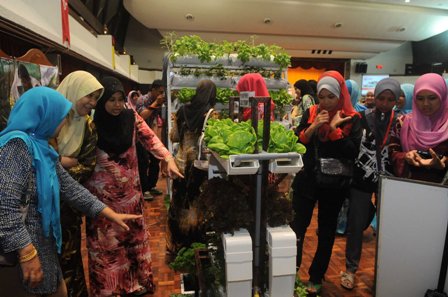 He also drew the attention of the staff, students and lecturers of UPM to the recent milestones in the development of the university. The first was the Feb 4th, 2013 announcement by the Ministry of Health to provide teaching and research facilities at Serdang Hospital exclusively for UPM by moving students from private institutes of higher learning who are doing their practical at Serdang Hospital in stages to other hospitals.

At the same time, UPM also received RM600 million from the goverment tobuild a UPM Teaching Hospital with a capacity of 400 beds including hospital equipment, in order to transform the Faculty of Medicine and Health Sciences to become a centre of excellence in medical studies to produce more specialists and sub-specialists.

UPM is the only Research University offering medical studies programme that does not have its own Teaching Hospital although it has been in operation for 17 years. Without a Teaching Hospital that is exclusive for UPM, advancement in graduates studies in clinical fields had been delayed besides limiting post-graduates, specialists and sub-specialists programmes.

Prof Datuk Dr Mohd Fauzi said UPM and the Kyushu Institute of Technology (Kyutech) of Japan would now offer post-graduate dual degrees programmes where the initial stage would involve PhD students.  This was made possible after UPM and Kyutech signed a Memorandum of Understanding and a Memorandum of Agreement to form MSSC which is the first off-shore Japanese public university campus outside Japan.

Students will be supervised by a Joint Supervisory Committee from both sides before their thesis are checked by the Joint Examinations Committee and students will be awarded two degrees, one from each university.

This will enable more Japanese students to register at UPM since the cost of higher education in Japan is very high. UPM will provide a location for the new campus at

the lower level of the Office of the Deputy Vice-Chancellor (Industrial and Society’s Networking) building.  Kyutech had alloted RM320,000 as a yearly allocation for MSSC. 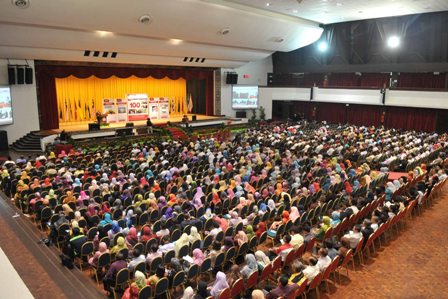 The new Vice-Chancellor also directed all the faculties and departments (PTJs) to save, saying that those which managed to save would have their management allocation cut the following year but would be given a matching grant based on the amount saved.

The Matching grant comes from the bidding fund and UPM will limit the grant to the best 5 PTJs which succeeded in saving cost.

Through compulsory savings, 10% of management allocation for all PTJs would  become a fund for bidding in order to increase performance and services besides generating income.

On the future of the UPM Bintulu campus which houses the Faculty of Agriculture and Food Sciences, he proposed the setting up of the Borneo Institute for Environmental Research at the campus to undertake more comprehensive research on the vast tropical forest of Borneo and become a reference centre in that area.

UPM, he said, has set up the first Malay Heritage Museum in the country by focusing on Malay artifacts which included Malay manuscripts, Malay traditional weapons, Malay textiles and fashion for the benefit of teaching and learning, research, publications and development.

To transform the transportation system in the campus starting from the first semester 2013/2014, he said students would be placed at colleges near their faculties while their timetables would be drawn to minimise students movement. This would encourage students to walk and not to use motor vehicles.

The university would encourage student to cycle as a way of a healthier lifestyle apart from being more fun. Reducing bus services would save for the upgrading of lanes for bicycles and pedestrians.

Prof Datuk Dr Mohd Fauzi also announced that Friday afternoons would be devoted to  cycling or jogging session for members of the University’s Management Committee and its senior officers besides organising visits for the Vice-Chancellor to survey the cleanliness, advancement of development and security of the campus in what he called ”management by walking”.

To reach out to the community and public, he said they had re-furbished a coach into a mobile UPM Knowledge Clinic which would go out to share the university’s expertise in   agriculture, veterinary sciences, health, engineering and social sciences.