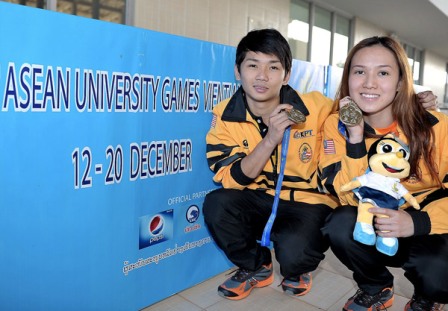 VIENTIANE,31 Dec–
The athletes of Universiti Putra Malaysia (UPM) had proven their worth by contributing the most number of medals for the Malaysian contingent to emerge overall champions of the 2012 ASEAN University Games (AUG).

The UPM athletes had won 28 gold, 22 silver and 13 bronze medals at the week-long games.

The medals clinched by the UPM athletes contributed 35 percent out of the overall medals won by the national contingent, which is 60 gold, 48 silver and 72 bronze medals.

The triumph has made the UPM athletes the biggest medal getter for the country at this year’s AUG, where Malaysia emerged as the overall champion.

Held from the 12th to 20th December, the game witnessed the triumph of swimming and archery, which brought the most gold medals to UPM squad, with 6 gold medals each. 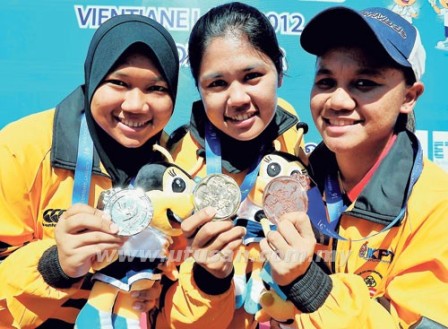 A student from the Faculty of Economics and Management, Kevin Yeap Soon Choy led the swimmers to bag five gold from the 1500m, 800m and 200m individual freestyle category, a silver medal and bronze for the400m and 100m freestyle medley relay.

“Generally, I am pleased with my performance although I’ve missed my target to ace all gold medals,” he said.

Tailing close is team mate Chu Lai Kwan of the Faculty of Food Science and Technology, who swam for gold in the 50m individual freestyle category as well as 400m and 100m relay.

World’s diving ace,  Leong Mun Yee stole the show at the Vientiane National Sports Aquatic Centre when she plunged for a gold medal in her favourite category, the 1m-spring board, beating fellow diver, Cheong Jun Hoong, from the Faculty of Modern Languages and Communications.

Mun Yee achieved another target when she ruled the 10m platform event with a score of 281.70 points, eclipsing her contenders from Indonesia and Philippines.

“Although most people predict my winning both categories, I must admit the competition this time around is stiff,” said the Malaysian Olympian. .

The national archery team, on the other hand, is also studded with skillful archers with international experience whose forte is in the compound and recurve rounds under the individual and group category. 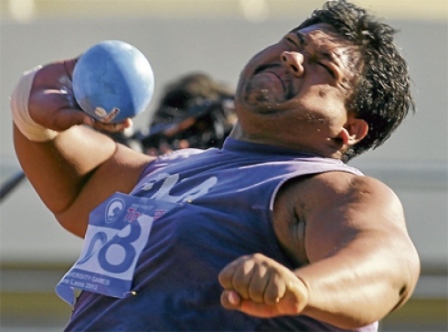 “I’m elated that I won gold for the country even though I had to fight against my own team member, apart from experienced ones,” said Saritha.

Also shining bright is MohdFirdaus Isa, a student from the Faculty of Educational

The archery squad, made up of Wan Mohd. Khalmizam Wan Ab. Aziz and LiewTekWa of FBMK and NazrinAizad of FPP also had effortlessly hit the target by winning gold in the group recurve category.

UPM’s track and field team did not disappoint with the winning of a gold medal. For this, national shot putter Adi Alifuddin Hussin stamped his superiority by winnig the gold for the 3rd time. He had won the gold at the 2008 AUG in Kuala Lumpur and the 2010 AUG in Chiang Mai, Thailand.

A national record holder , Adi, who is from FPP, retained his champion title with a 16.24m throw at the final held  at the Laos National Sports Complex. He also won a silver at the 2011 SEA Games in Palembang.

In addition, the athletes for karate-do and wushu were excellent in their performances,   winning three gold medals while the UPM  badminton squad  bagged two gold medals for the country. – UPM