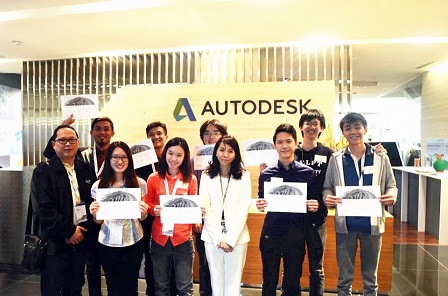 They grabbed the award through their project - Amphibious Habitat which featured a smart home design in facing a flood situation.

The competition was organized by a Singapore-based company and sponsored by Autodesk, with participants coming from Malaysia, Indonesia, Singapore and the Philippines.

She also said that the prototype of the house design was proposed for the meeting point between Semantan River and Pahang River in Temerloh, which experienced flooding almost every year.

He added that the concept of the house is timber flooring with a total area of about 40 square metres and comfortably occupied by three persons, using renewable energy source such as solar, rainwater harvesting system and bio-sand water filtration system for clean water, aquaponics technology to rear fish as well as a composting toilet to produce natural fertilizer.

“The columns for the house are bamboos while the concrete mooring post is used as a floating mechanism. The house stands on detached concrete stilts which could hold the load of the house when it is not floating,“ she said in an interview.

She added that multifunctional furniture is used for the house to enable flexible spatial usage.

In coming up with Amphibious Habitat, she said they conducted a case study which lasted for several days in early 2015 on house designs in Netherlands, the country where the sea level is higher than the mainland.

However, she said, the process to produce Amphibious Habitat entailed a site visit, designing and producing drawings for the presentation boards and all these took about one month to be finished.

Heng Hee said she was shocked when he got to know that they had won the gold medal while surfing the organizer’s web site, and she immediately contacted Mei Shan who was then in Penang.

“I did not expect that we could win due to stiff competition from other contestants. Whatever it is, I am happy that we have won,” she said.

In addition to the gold medal and a certificate, they also received a sponsorship to participate in Autodesk Bootcamp Panaroma in Singapore which was held from March 21 to March 25, 2016 and participated by other contestants from Asia.

Mei Shan said she was surprised when Heng Hee told her that they had won the gold medal at the Autodesk ASEAN Design Competition.

“I am really happy and proud for UPM FRSB as the victory is achieved through guidance from the lecturers,” Mei Shan said. They also expressed their gratitude to other lecturers and friends for their guidance and encouragement. – UPM.