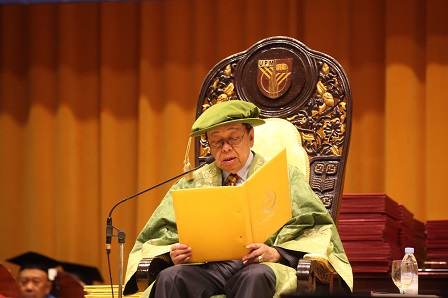 SERDANG, Oct 27 – The Chancellor of Universiti Putra Malaysia (UPM), Sultan Sharafuddin Idris Shah has expressed his wish for UPM to be the leader in the utilisation of artificial intelligence and innovation in driving the development of the country's agricultural sector.

He said that in order to make Malaysia a developed nation in the era of Industry 4.0, it needs to compete in the global market and trade its products and services internationally. "I hope UPM takes the lead in utilising artificial intelligence and innovation especially in the agricultural sector by producing viable human resources and strategies that can be effectively implemented in Malaysia to drive the development of the country's agricultural sector," he said at the 42nd UPM Convocation Ceremony (2018) at the Sultan Salahuddin Abdul Aziz Shah Culture and Arts Centre here.

In this regard, he hopes that graduates will be able to fulfil the trust and continue their excellence wherever they are, as human resources or talents are vital in realizing the aspiration.

During the ceremony, Sultan Sharafuddin, who is also the Sultan of Selangor, awarded the Professor Emeritus title to Dr. Nordin Lajis for his contributions and services to UPM. 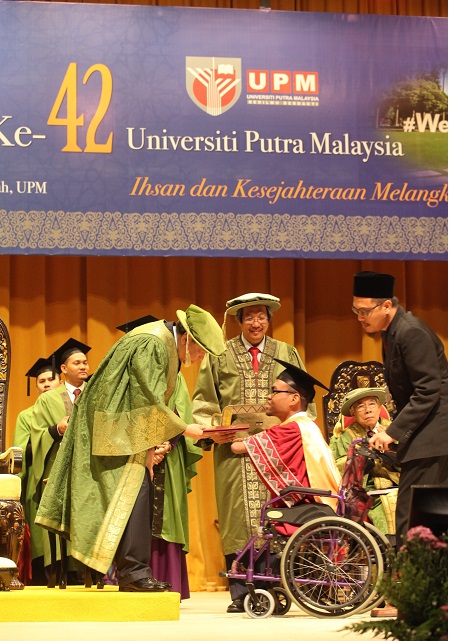 Sultan Sharafuddin was also pleased with UPM ranking for the year 2018/2019 which has moved up 27 places, to be placed 202th in the QS World University Rankings, making it among the top 1% of the best universities in the world.

He said that all parties need to give their full and undivided supports to achieve the target of being ranked among the top 200 universities in the world by 2020. Sultan Sharafuddin also hoped that apart from getting their academic scrolls, graduates will also take home with them the spirit of volunteerism which has been instilled in them throughout their studies at UPM and continue to practise it regardless of whether or not the activity is related to their daily work. Sultan Sharafuddin was also proud of the success of UPM in winning the main prize of the Intellectual Property Management Award 2018 for the organisation category at the national level and the success of the researcher and Dean of the Faculty of Veterinary Medicine, Prof. Dr. Mohd Hair Bejo who had won the Merdeka Award for the health, science and technology category. He also congratulated UPM athletes who have brought honour to UPM and the country at the international arena, in particular, Cheong Jun Hoong and Leong Mun Yee, and UPM rugby players who have contributed the most in the formation of the Malaysian university Rugby team. – UPM