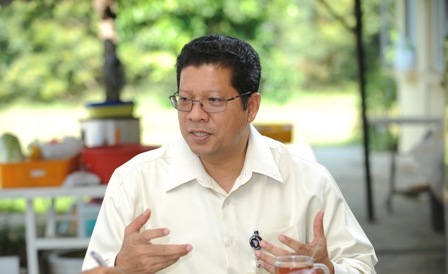 He was the TPU Director from January 2012 until 31 December 2014, managed to inject fresh elements into TPU whose previous role was as a service, agriculture and training facilities provider.

He said, palm fruit collection was previously done on a contract basis, however, since 2014, TPU staff took the initiative to collect and send them directly to the factory, subsequently returning higher income. 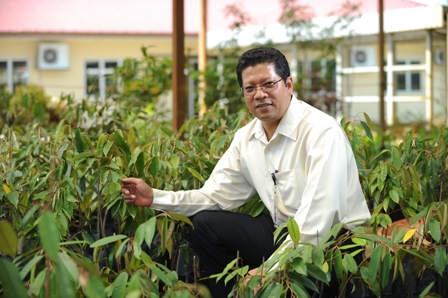 Prof Dr Abd Wahid, now a lecturer at Faculty of Veterinary Medicine, said for two consecutive years, ‘rambutan fiesta’ was held by starting on a small scale in 2013 before being held on a larger scale in 2014.

"Visitors could feel the experience of picking the rambutan. Some of them were climbing trees and picking the fruits while enjoying the excitement.

"They said 'if you simply want to eat rambutan, they can be bought at supermarkets, but here you can experience and enjoy picking them in a rambutan grove environment'. The response led to ‘rambutan fiesta' which was originally planned for two days, had to be extended to five days last year," he said.

Due to the abundance during its season, TPU also collaborated with Faculty of Food Science and Technology in producing rambutan-flavored cordials and jam.

For alternative farming areas, when there was no activity during semester breaks, he said, the staff worked on cash crops such as bananas and corn to ensure the land was being fully utilised.

According to Dr Abdul Wahid, he also focused on tree replantation in areas with senescent trees by working together with Faculty of Agriculture in replanting palm trees three years ago around Banquet Hall area.

In addition, durian replantation was made around college area to replace 30-year-old durian trees by planting the area with commercial durian clone such as ‘Musang King’.

He said at Ladang Puchong (Puchong Farm), there were many mango clones but not commercially viable and had never produced fruits. "After a pollination effort was done, they started producing fruits. Although they had no commercial value, those trees were important for research materials, collection and hybrid purposes. "

Through a collaboration with Faculty of Food Science and Technology, he said, production of fruit-based products such as citrus, papaya and hog plum was also pursued. There were 60 nutmeg trees at Bukit Ekspo.

Dr Abd Wahid said as for livestock, such as dairy and beef cattles, goats as well as deer,  the silage system was expanded at the end of 2012 in order to improve the quality of the fodder which was the main food source for the animals, especially in times of emergency such as the drought season.

Cut-and-haul method was used and animals were not allowed to enter the grass field area.

After three years at the helm, he wanted to see TPU grow further. "UPM especially TPU farm area could be used as an area for recreational activities such as cycling."

He said, there were many areas that could be reserved as cycling tracks. "Besides visitors participating in leisurely activities, they could also learn. While riding a bicycle for instance, they could read scientific names of the trees based on the tags that we put on every tree. "

For industrial plantation, he said, replantation effort to replace senescent oil palm and rubber trees, needed to be implemented like the one located behind Bioscience Institute. - UPM