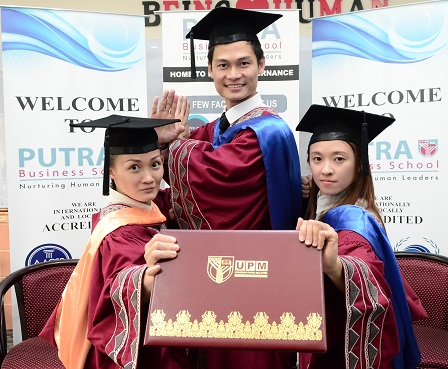 “Must be wise in managing time…as an athlete, we surely feel exhausted, particularly during tournaments,” said the athlete who hails from Miri, Sarawak.

“Assistance rendered by lecturers and fellow students is equally important,” said Jack Chang who undergoes training in the morning and afternoon from Monday to Friday and Saturday morning.

He added that he attended classes after training in the morning and in the afternoon, and normally did revision and other academic assignments at night.

“I am grateful to have achieved what I have aspired for…success in both academic and sports,” he said, adding that he aimed to win gold in the 2017 SEA Games.

Fong Wei, 28, who is silver medalist of 2016 Asia Wushu Championship in Taiwan, three bronze medals at World Wushu Championship  2007, 2011 and 2013, two bronze in 2005 SEA Games and another bronze (demonstration sports) in Beijing Olympics in 2008, said she made it a point to give full attention when in class.

“I really focus when I am studying…no music, no mobile phone, nothing.

“Half of my time is spent on training and sports activities, so I really need to focus when studying,” said the lass who hailed from Malacca.

She also announced that she is retiring from sports due to injuries she suffered in both her knees and wanted to take up a job in the field of management.

Diana Bong, 31, from Kuching, Sarawak, said high commitment was pertinent in order to succeed in both sports and academic.

“Self discipline is vital, otherwise, it will be tough to achieve success in both areas,” she said, adding that she was preparing herself for the Wushu World Cup in China in November and 2017 SEA Games.