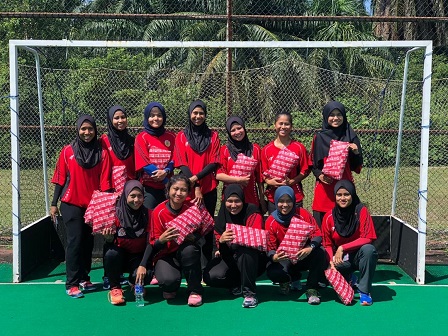 Sixth College showcased strengths and defeated Chancellor College without challenge through the scores made by Safiqah Mat Isa, Baiduri Tajuddin and Liyana Sepawi.

At the championship, Sixth College won all the matches without conceding a goal.

Senior Assistant Registrar of the Sports Centre, UPM, Wan Zaharuddin Wan Abdullah said the championship is a platform to identify college students with talents who could represent UPM in MASUM.

"I see this championship encourages college students to engage in sports activities and helps students to become healthy physically and mentally as well as remain competitive, as shown by each player of Sixth College," he said.

Wan Zaharuddin Wan Abdullah then presented the prizes and certificates to the women’s hockey squads of Sixth College and Chancellor College.

The Sixth College women’s hockey squad manager, Zaharah Sailan Abdullah, said she was very happy with the performance and determination shown by the players throughout the championship.

"I am very satisfied with the commitment given by the players from the start of the training until the end of the championship. I hope this success will motivate them to defend the championship next year,” she said. - UPM