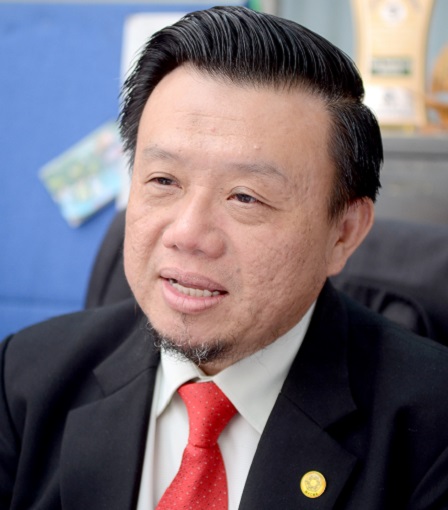 SERDANG, 24 Jan - “I enjoy doing dakwah (missionary work), and I want to share information with many people and help to fix bad perceptions some people have towards Islam”.

Those were the words uttered by Prof. Dr. Taufiq Yap Yun Hin, a lecturer in the Faculty of Science, Universiti Putra Malaysia (UPM), who was the recipient of the National Maulidur Rasul Award recently.

Prof. Dr. Taufiq, who is also the President of the Malaysian Chinese Muslim Association (MACMA), hopes that his little effort will contribute to changing people’s perspectives towards the image of Islam.

“I am touched for being chosen as the recipient of the Maulidur Rasul Award,” said Prof. Dr. Taufiq in an interview here.

He expressed his appreciation to UPM as UPM was the higher learning institution where he had furthered his Masters before continuing his doctoral studies (PhD) in Manchester.

“My achievements in UPM are definitely one of the contributing factors that had gotten me nominated as the recipient of the Maulidur Rasul Award,” he said.

Prof. Dr. Taufiq, who is also the Head of the Catalysis Science and Technology Research Centre (PutraCAT), UPM, said that through the research work done in the Centre, he intends to help the country to produce affordable and sustainable bio-fuel from waste or biomass.

“Our country is rich with natural resources that can produce bio-fuel… this can be a substitute for petroleum which one day might become exhausted,” said Prof. Dr. Taufiq who is also the founder of the Centre established in 2008.

As the president of MACMA, he explained that the association acts as an agent to strengthen racial unity in this country because MACMA consists of Chinese Muslims who understand the Chinese culture if it does not contradict or against the teachings of Islam. This kind of awareness can be applied to activities involving non-Muslims in this country.

Prof. Dr. Taufiq, who was born in 1968 in Kota Kinabalu, Sabah, said that although he and his step siblings have different religions, they have a very close family bonds and they respect each other’s religious beliefs, and every year they will get together for dinner during Chinese New Year.

He said his father passed away when his mother was pregnant with him. His mother, Chin Sze Kiaw, later remarried and had three children.

According to Prof. Dr. Taufiq, he started his ‘search’ for God in 1983 when he was in Form Four in Sekolah Menengah Jenis Kebangsaan All Saints, Kota Kinabalu, where he frequently asked his teacher, Shamsiah Shafie and his friends who are Muslims.

“At that moment, I started to learn and memorise all the recitations in prayer from books in Roman writing”. He even started to perform prayers before he converted to Islam.

“Before embracing Islam, I did give some hints to my mother and explained to her… my mother did not have any objections, rather she supported my decision.”

“A week before I embraced Islam, my mother took me to a shop and bought the dishes and pans for me to use because she understood that I cannot use the same dishes and pans as theirs,” he added.

He said that he recited the Shahadah on 26th November 1983 in front of Ustaz Suhardi, but he did not register as a Muslim at that moment because he was underage.

“My stepfather did not know that I had converted to Islam, but soon he realised something was different over dinner when he started to wonder why the food was cooked separately, and I was using a different set of plates,” he said.

Prof. Dr. Taufiq added that his stepfather was made aware of his conversion to Islam by his school teacher, and his stepfather did not disapprove the decision.

“In 1985, my stepfather fell sick and admitted to the Queen Elizabeth Hospital, Kota Kinabalu, and he recited the Shahadah in front of me on 1st May 1985, which was three days before he passed away,” he said while adding that his stepfather’s new name after embracing Islam was Abdullah.

In June 1987, he said that his mother dreamt of her husband’s conversion to Islam, and that led her to recite the Shahadah and embrace Islam the very next day together with his younger stepsister.

His mother’s new name was Aishah, while his stepsister’s name was Norain Lim.

He also mentioned that his other two younger sisters are not Muslims, but their relationship as siblings is still strong.

“During Chinese New Year, we will gather and have meals together,” he said.

Prof Dr. Taufiq was also a guest speaker for IKIM Radio in a slot called ‘Islam Agamaku’ (Islam, My Religion) in 2015 and 2016, while in 2017 and 2018, he was a guest speaker for a programme entitled ‘Kembali Fitrah’ (Back to Human Nature) that was produced by TV Alhijrah. – UPM.