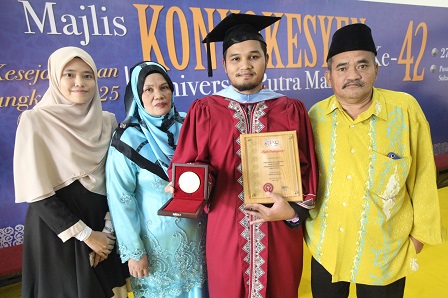 SERDANG, 22 Oct -  “I am truly grateful. This award is very meaningful, and it will become the driving force that motivates me to achieve greater success in the future.”

Those were the words uttered by Tengku Shahiran Tengku Ruslan, a Bachelor of Education (Teaching Bahasa Malaysia as the First Language) graduate from the Faculty of Educational Studies who won the Chancellor’s Gold Award Medal, in conjunction with the 42nd Universiti Putra Malaysia (UPM) Convocation Ceremony which began on October 27.

He said it had never crossed his mind that he would receive the prestigious award, especially when there were many other graduates who have also achieved excellence in various fields.

Furthermore, he said that the documents including the certificates for the award nomination were submitted at the eleventh hour.

Tengku Shahiran who was born in Jelebu, Negeri Sembilan said that he had overlooked submitting the nomination early due to his hectic schedule as a volunteer at the UNHCR office, Petaling Jaya and as a weekend tutor at Sekolah Menengah Kebangsaan DUSAJ, Jelebu.

“Two weeks ago, I received a call which I was unable to answer from the Student Affairs Division (BHEP), UPM. When I returned the call, I was surprised and was almost in disbelief when told that I have won the Chancellor’s Gold Award Medal,’ he said.

He added that he was so grateful for the award and would continue to strive for success in his future career.

“I’m interested in becoming an educator, and it has always been my ambition since I was young to teach children in schools,” said Tengku Shahiran who is expected to attend an interview for a teaching position in Melaka this coming November 1.

While studying in UPM, Tengku Shahiran together with 12 of his friends, were involved in a programme in which they taught children in Nakhon Sithammarat, Thailand for a month, last February. Then in January, he participated in a mobility programme which required him to teach children in Padang Panjang and Pekanbaru, Indonesia for two weeks. – UPM